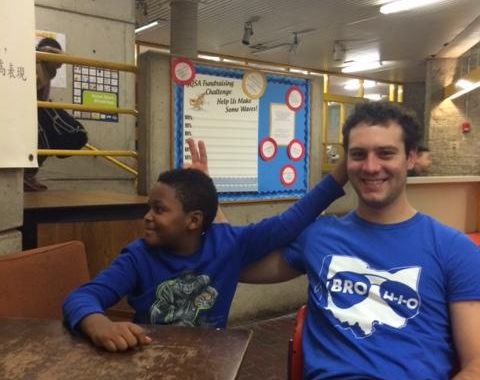 College Athletes Give Back: Emerson Basketball Mentors in Boston

Jared Kortsen had always felt like he was missing out on something. After transferring from the University of Akron to Emerson College in the Fall of 2014, he felt like the pieces were started to come together, but something was still lacking. Then his fellow teammates told him about the opportunity to become a mentor and suddenly things fell right into place.

In the Fall of 2013 the Emerson College Men’s Basketball team made a decision to become mentors to kids in need within their community. Over a year later, the team still has five active Big Brothers, Eli Kell-Abrams, Mike Corcoran, Jacob Forchheimer, Kyle Edwards, and Jared Kortsen. They spend time with their Little’s once a week at the Josiah Quincy Elementary School in Chinatown. .

Sophomore transfer student Jared Kortsen made the move from the University of Akron to Emerson College to be a part of the basketball team. But the chance to be a mentor was an added bonus. “All the guys who were Bigs on the team really encouraged me to do it, they said it was a great experience and a lot of fun,” Jared said. So with the urging of his team he signed up to be a Big.

Emerson Men’s Basketball Head Coach Bill Curley believes that mentoring is fundamental in creating not only well-rounded people but also athletes and is thrilled to continue being a part of the Collegiate Athletic Mentoring Initiative with BBBSMB. “It is so important for the players to step out of the box and see that there is more to life than the box score of a basketball game and this program allows them to do that.” Coach Curley said

Jared is so grateful that he stepped out of the box. “My Little, Acacio, is just so much fun to be around, we’re a great match,” he explains. He spends time with Acacio playing basketball, board games, and even checking out funny YouTube videos. “We are much more comfortable with each other now. It took us a bit to open up, but one time he asked if we could watch a funny video on YouTube and I said sure, and that’s when we started to open up to each other,” Jared said.

Acacio’s mother is thankful to have Jared in her son’s life. She explained how Jared is great with Acacio and how they have such an easy, go with the flow bond.

During the 2014-2015 basketball season the Littles were invited to come watch their Bigs play. After the game the Littles were shooting hoops with the Bigs laughing and running around with smiles on their faces. “Being teamed up with a tremendous program such as Big Brother is really great for us as a team,” Coach Curley said, “you can tell by the way that the guys walk back into the gym after spending time with their Littles that they are more confident and happier.”
The connection that these athletes have with their Littles is strong and the relationship between Emerson College Basketball and the Josiah Quincy Elementary School will last for a long time.

Looking to the future, Jared hopes that he can switch from a school-based match to a community-based match. “I know Acacio wants to go to the movies with me, and have me come watch his games, and I would love spending more time with him, this will be a relationship that lasts a long time.” Jared said.