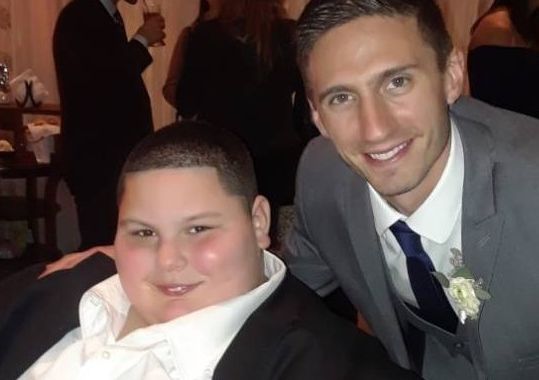 A New Look at Mentoring

Being in a match not only impacts the Big and Little involved, it also influences those around.  In honor of National Mentoring Month, we looked at a match through a unique perspective and talked to the Big and his Little’s grandmother about the effects of a positive role model.

Big Justin and Little Marcus have been matched for almost 4 years; Justin discusses his match story and Marcus’s grandmother, Debbie, reflects on the positive impact their relationship has made.

Justin:  “I first got involved with Big Brothers Big Sisters in the spring of 2015 and had my first meeting with Marcus in May of the same year. The first time I met Marcus, he was shy at first; he had just walked back with his mom from swimming in nearby Wright’s Pond. We connected that day talking about baseball and though I am a New York sports fan, our shared admiration for David Ortiz. By the end of our first meeting, he was making rabbit ears behind my head in our photo!

Being a Big Brother has been an incredibly meaningful experience for me. Above all, it’s taught me the power of empathy and the strength of the personal connections we make with others. Any kindness I have shown has been returned to me by both Marcus and his grandmother Debbie twofold. I have such admiration for both and feel lucky to have them as a part of my life.

My favorite memories with Marcus have become our annual traditions, namely apple picking and snow tubing. Marcus is meticulous at apple inspection; his standards are too high and as a result, we must canvas the entire orchard. Ultimately though, we both love spending a relaxing fall day outside together.

When I joined the program, I was looking for a way to give back first-hand. Being a big is about enabling kids to experience something new and providing insight into all the opportunities they may have not otherwise known about, all while making a great friend along the way. For anyone hesitant to volunteer, I cannot emphasize enough the power your time has on another’s life. Whether it’s a Red Sox game or simply going for a walk together, your presence and compassion leave a lasting impact.”

Debbie:  “My daughter, Stefania (his mom), and I spoke about getting Marcus a big brother in 2015.  His father was never involved in his life. He was extremely close to his mom, but needed a male role model.

When we first met Justin, we took an instant liking to this young man. Especially when he said he had 2 sisters and always wanted a brother!!  My daughter stated ‘and I always wanted a sister!!’ It took Marcus a little longer to warm up…but as he started to have one on one time with Justin, he started to open up.

In November of 2016, my beautiful daughter died quite unexpectedly.  It has devastated my family. Marcus is struggling w

ith his anger and grief even with weekly counseling. Justin stepped in and became an amazing role model and mentor. My most exciting moments was seeing Marcus and Justin on the Jumbo Tron at a Celtics game and attending Justin’s wedding this past November. I have seen changes in Marcus as he interacts with Justin. He listens and most definitely respects his

thoughts and ideas on interesting activities and sports!!  With me being 65, there are many

opportunities (such as snow tubing haha) that Marcus would not get to enjoy if Justin was not in our lives.  He is Marcus’s special friend and he is very supportive of my ideas and thoughts.

I would strongly recommend the BBBS program to any parent looking for a strong mentor and understanding person for their child. They don’t just match and forget about it…they ask for monthly feedback to make sure it works from both sides!!

Marcus said that he felt sort of strange when he first met Justin. He is a boy of few words… just ask Elizabeth the Match Advocate!!

His most fun with Justin was attending a BBBS night at a Red Sox game and their yearly snow tubing adventures. When I asked him about a difficult situation that Justin helped him through, it was of course when his mom died. We were not sure if Marcus should attend the wake and Justin took him out and talked to him that night and we let him come for a brief period of time and then Justin took him back out again until the service was over.

We are overjoyed with our match.  Justin is a genuine, all around nice guy with a level head on his shoulders.  Everyone should be so lucky as we have been with this match!!

Thank you from the bottom of my heart!!”