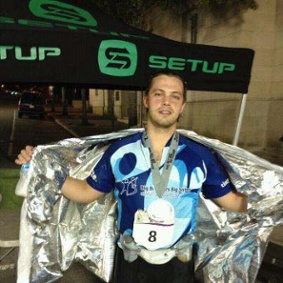 While some bucket lists include jumping out of an airplanes or traveling the world, Boston College undergraduate and Big Brother Alex Eaton wanted to do more.

Eaton first became familiar with Big Brothers Big Sisters of Massachusetts Bay through Boston College. As a previous mentor in Beverly, he knew he wanted to be with a Little Brother who really needed his help. In response, he specifically asked for a Little Brother who had been on the waitlist for a while. Despite the long commute, Eaton was matched with his Little Brother Jeremy within 6 days and they’ve been together ever since.

After partnering with Big Brothers Big Sisters of Massachusetts Bay, Eaton was inspired to become more involved and took the “Being BIG” mentality to a whole new level.  On October 20, 2012, Eaton joined the Beach2Battleship Iron-Distance Triathlon competition to raise money in support of Big Brothers Big Sisters of Massachusetts Bay and his Little Brother, Jeremy. Eaton completed the 2.4 mile open-water swim, a 112 mile bike ride, and a marathon.

While training for his first Triathlon, Eaton decided to participate in the Rodman Ride for Kids on behalf of BBBSMB to bike 100 miles in preparation for the triathlon and to inspire support for the cause. When asked what prompted him to take this courageous step, Eaton explains, “I knew that other people had run marathons and trained for a cause and I knew immediately that I wanted to do that for Big Brothers Big Sisters of Mass Bay. Participating in Rodman Ride fit perfectly into my training regimen and it seemed like a great way to keep me motivated while supporting an organization that I really believe in.  Big Brothers Big Sisters of Mass Bay provides you with a relationship that you can’t really replicate anywhere else. It allows me to be a kid again and be a true friend to someone who really needs me. ”