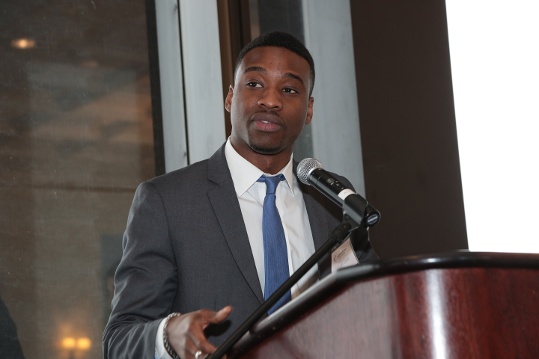 When Nigel Deen was matched with his Little Brother Stevon over a year ago, he never knew he’d not only be gaining a brother, but a friend he would be forever grateful for. Deen shared his experience with BBBSMB at the 2015 BBBSMB Partners Breakfast at the Boston College Club. He described the program as “a very necessary mission” and one that he believes in strongly. Read his inspiring speech that captured the crowd in our latest Being Big blog post.

As a Harvard College graduate who was looking for ways to give back, stumbling upon Big Brothers Big Sisters of Massachusetts Bay was at first intimidating. He wasn’t sure if he could handle the responsibility of adding a Little. He didn’t know if he would have enough time, or even be mature enough for the role. But, after his first meeting with Stevon that fear dissolved and now he shares his joy at getting to be a part of Stevon’s life forever.

“First and foremost, thank you to Big Brothers Big Sisters for giving me the opportunity to speak this morning; you are doing incredible work and I’m proud to be a member of this organization. This is an organization with a very necessary mission: to help children realize their potential, build their futures, and strengthen communities. I, along with all of us in this room, am a part of Big Brothers Big Sisters because I believe in this cause.

On Tuesday night I was lucky enough to catch Mayor Walsh’s State of the City speech. I say, “lucky” because I was actually trying to tune into jeopardy but they had apparently postponed the episode to make room for the speech. I wasn’t exactly happy about the situation however; I did listen to the speech. It was uplifting, powerful, and forward thinking. It had a clear message; if Boston is to be the thriving, healthy and innovative city that it has the potential to be, then we must work to improve every aspect of our community: every neighborhood, every school, and every child. I walked away from that speech with the firm belief that Mayor Marty Walsh and the Big Brothers Big Sisters organization share the same vision.

I joined Big Brothers Big Sisters because I believe that the work we do will have a lasting impact on the community. Initially, I came up with every excuse not to volunteer my time: at first the excuse was school, and then work, and then “life” in general. I was sure that I wasn’t responsible enough – I still can’t say that I am – but I realize now that it doesn’t matter. The role of a Big Brother is to allow children to be just that; children; to provide a stress free environment for Littles to be themselves. It is an unfortunate truth that not every child has this opportunity.

I’m forever grateful for my little brother, Stevon. Stevon is funny, incredibly smart, and holds an insatiable love for sports. – all sports. Before our first outing, I called him before I left my house and asked him what his favorite sport was; I planned on bringing whatever ball, bat, glove, etc. that I needed. He told me he liked every single sport – I asked him to be more specific and he said that he couldn’t. At the time I was living with 5 other guys, so I pulled together a softball bat, a glove, a soccer ball, a basketball, and a football. We spent 3 hours playing. I asked for many water breaks. At the end, when I had to drop him home, he started to cry. That particular moment will remain with me. I did not realize how much the time meant to him. I couldn’t. I took it for granted. I told him that I would be back the next week; we’ve been brothers for over a year. From trips to the Aquarium, to watching Celtics games, I can gladly say that I’ve had the opportunity to watch Stevon grow and I’ve also had the opportunity to become a member of his extended family. I’ve spent time speaking with his mother, his teachers, his sisters, and friends; he introduces me as his Big Brother and I can see that he is proud to be able to say that.

I am thankful to Big Brothers Big Sisters for bringing me into Stevon’s life. I am truly invested in his future and wellbeing. Brotherhood has the ability to do just that; create empathy. Stevon and I, as with all Bigs and Littles, belong to the same community. I care about Stevon’s neighborhood because he is my brother. I care about the quality of his education because he is my brother. I care about the state of his park because he is my brother. Stevon and I share no biological ties, but I care for him because he is my brother. It is a powerful bond and one that I know I will have for the rest of my life. I am happy to speak on behalf of an organization that has the potential to create these bonds and provide access to opportunities that every child should have. There is still much work to do; I’m a strong supporter of the #AddALittle campaign and believe it necessary to match every child on the wait list. Every family that has signed up for this program has done so because they recognize the immense impact that the program can have on their child, not to mention the impact it has on the Bigs themselves. These families have met us halfway; we need to do the rest. Big Brothers Big Sisters has the ability to reach the hearts and minds of many in this community, and to unite us all so that every child, in every school, in every neighborhood, may realize their potential and the great potential of this city.