In celebration of Black History Month, AARC would like to highlight the intersectionality between race and disability, and recognize the stories of a few amazing Black leaders in the Disability Justice movement – check them out!

Keri Gray – Educator, activist, and founder/CEO of the Keri Gray Group advises young professionals, businesses, and organizations on issues around disability, race, gender and intersectionality. Here she explains why intersectionality is so critical to true inclusion and the significance of BLM as it relates to disability and other identities: Keri Gray on Intersectionality

Johnnie Lacy (1937-2010) – Leader in the independent living movement and fought for the rights of people with disabilities, especially people of color. She led Community Resources for Independent Living, a nonprofit in Hayward, CA providing services and advocacy for people with disabilities. Lacy spoke of being excluded from the Black community due to her disability and from the disability community due to being a person of color. As a Black woman in a wheelchair, she educated her communities about race and disability and served as a role model for many other disabled Black women. Listen to her story on this short podcast on Intersectional Insights:  Highlighting Johnnie Lacy

Brad Lomax – Black Panther Party member, founder of Center for Independent Living in Oakland, CA and participant in the 504 sit-ins. Brad has Multiple Sclerosis and uses a wheelchair. Brad’s involvement in disability advocacy helped motivate the Black Panthers to support the disability movement as well and they became disability allies. Particularly with the sit-in, which forced the government to implement Section 504 of the Rehabilitation Act, the BPP’s support was critical as they provided hot meals for the  protesters daily. Learn more about Brad Brad Lomax, Black Panther – Revolutionary Black Nationalism and Disability Power and/or the 504 sit-in Short History of the 504 Sit in.

Mama Cax (1989-2019) – Haitian-American disability rights activist and model who broke boundaries in the fashion industry and popular culture by celebrating her disability – speaking openly about it and proudly wearing and adorning her prosthetic leg with bold colors and patterns. Mama Cax was 14 when she found out she had bone and lung cancer, ultimately resulting in her right leg being amputated. After fighting through her own insecurities and lack of self-confidence, Mama Cax learned to love and celebrate her body. She started showing off her prosthetic leg and using it to express herself. She landed major modeling deals and was one of the first models with a prosthetic to walk the runway at New York Fashion week. She used her platform to become a motivational speaker and to raise awareness about the disability community and body appreciation. 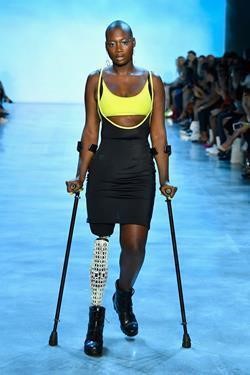 Bassey Ikpi – American-Nigerian mental health advocate, writer, founder of the Siwe Project, a foundation that promotes mental health awareness in the global Black Community and author of I’m Telling the Truth, but I’m Lying – a book about her experience navigating Bipolar II and anxiety throughout her life. She is a former slam poet and has written multiple essays on living with her diagnosis and has spent the last 14 years examining the ways that mental health intertwines with all other aspects of identity. Read one of her essays about the differences in how white celebrities and black celebrities are received when they reveal a challenge with their mental health: It’s Complicated and see one of her most celebrated poems performed:  Sometimes Silence is the Loudest Kind of Noise.

These are just a few of the Black advocates among MANY others who have helped advance progress for people with disabilities, many of whom are still fighting against injustice every day for their communities.  Check out these additional resources to learn more: