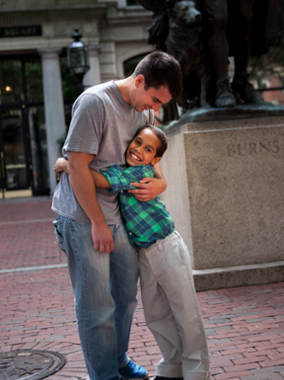 Having grown up with an older sister, Big Brother Brendan always wanted that Big Brother role model in his life. With inspiration from his roommate, a Big Brother of 8 years, he knew giving back to a kid who needed a male mentor would be a perfect way to give back. Now over 2 years into the match, Brendan and his Little Brother Edwin are closer than ever and stars of the Chicks Dig Bigs campaign. Check out his interview below.

I have always had an amazing, older sister to look up to, but growing up I never got to play the role of being a big brother.  My roommate has been a Big Brother for 8 years, so I got to see first hand how fun and rewarding the program is.  A couple years ago I was searching for a way to give back to the community, and given my roommate’s experience, BBBSMB seemed like the perfect match for me.  Now I finally get to fulfill my lifelong dream of being a big brother!

What have you learned from your Little?
I’ve learned a new perspective from my Little Edwin, and a renewed level of compassion.  It’s amazing to see an 11 year old who is so selfless.  When we are at the arcade, he’s trying to win a prize for his little sister, not for himself. Edwin’s provided me with more balance in my life and an outlet to escape from the stress of work and the day to day grind.

While it’s hard for me to take much credit for his growth, I have definitely seen my little grow in self-confidence.  Much like I was growing up, Edwin can be a little shy, especially with people he doesn’t know very well.  But he realizes more and more how much people like him as he opens up.  Just ask the cast and crew of the Chicks Digs Bigs video shoot.  He went from not saying a word at breakfast to cracking everybody up by lunch.

We grow closer with every time that we hang out.  With the both of us being a bit quiet, it took a couple outings to get totally comfortable with each other, but now it feels more and more like we’re just old pals.

Laser tag is definitely the tops. I’d say that I let him win, but that wouldn’t be totally accurate.  If I keep at it, I’m sure I can beat him by the time he turns 12…

If you could give advice to any new Big Brothers in the program what would it be?

I don’t think you need to overcomplicate things.  You’re a mentor, but ultimately, it should be an outlet for both of you to have fun.  I think everything else falls in place after that.  Whether they say so or not, your Little will look up to you and really appreciate having one more person in their life that they can count on.

Tell me about your involvement with the “Chicks Dig Bigs” campaign.

My Little Edwin and I launched our acting careers in the “Chicks Dig Bigs” campaign.  I thought it would be a fun/unique experience for us, and it definitely was.  My Little stole the show with his acting skills, and we had a blast hanging out with the other Bigs/Littles and the film crew.

I think the “Chicks Dig Bigs” campaign is a really clever way to get the word out about the Big Brother program.  I know there are plenty of guys like me who would love to get involved, but either don’t know enough about it or just need a little extra encouragement to actually visit the website or pick up the phone.  If we can mobilize women to reach out to the great guys in their lives, then we make a dent in the 800 boys in Boston who are waiting for a Big Brother.