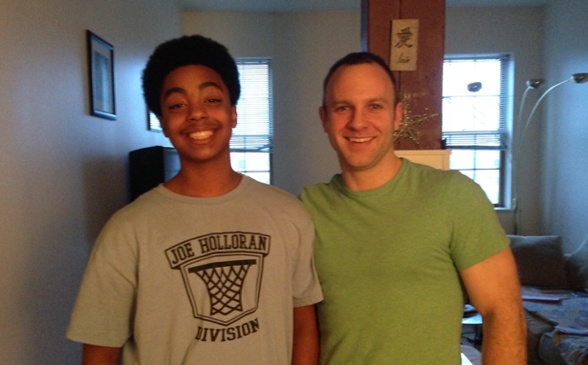 When Somerville resident Thomas decided to Add a Little to his life over five years ago, he made the decision to extend his family and make his Little Brother Jaden a part of it. Now, he looks back on his favorite memories of becoming a Big and the ever-changing roles that Jaden has played in his life.

My father brought it up to me one day. He was thinking about doing it and suggested I look into it. At the time, I was thinking about volunteering in some capacity to try to put a little more meaning and purpose into my life. Becoming a Big Brother to someone really seemed like it would be a very personal way to volunteer my time and energy.

Where you nervous about “Adding A Little” to your life? How were your hesitations alleviated?

I was nervous — I am not incredibly outgoing. Spending time with a young kid was definitely out of my comfort zone, but BBBSMB offers a lot of assistance if you need it. During the process of signing up, I also found out that my boss at the time had been a Big Brother for 4 years, and he was very encouraging.

What is your favorite thing to do together?

At this point, my favorite thing to do is just hang out — either at my place or at Jaden’s. I’ve got two kids and recently a new job, so life is pretty busy. It’s great on a Saturday afternoon to go hang out with J, grab some lunch, watch a little TV, maybe play some video games, and talk. When the weather is warmer, we really like to hang out and throw the football or shoot some hoops. Every once and while, we’ll do something a bit different, like visit a trampoline park or grab some of the tickets that BBBSMB has on offer.

We have a very easy going relationship. We get along very well, have developed a lot of the same interests. We make each other laugh a lot. I think a lot of that has grown out of having consistently spent time with each other over the past 5 1/2 years.

That’d be pretty tough to do, but some of my favorites include: a 2-hour marathon session of Mario Kart, the Saturday we visited the firehouse in the North End and tried on all the equipment, and more recently, when J was showing my 2-year old son how to color with his new markers.

Describe the first time you met your Little Brother. How have things changed since then?

When I first met Jaden 5 1/2 years ago, he was shy and liked to do a lot of indoor things. We spent much of our initial time watching movies, playing video games, or doing origami and making paper airplanes. As he’s gotten older, his interests have grown. He’s becoming a very good athlete, so we’ve spent a lot of time outdoors playing basketball or throwing around the football. That’s one of the really cool things about being a Big Brother — as he’s growing up and his interests are evolving, you get to do new things and be part of that.

I very much hope that he’s learned the importance of being able to dribble a basketball with either hand! I’m actually not sure what specifically Jaden’s learned from me. I’ve taught him some small things in the course of all the stuff we’ve done over the past 5 years, but my hope is that I’ve been able to provide an additional positive male role model in his life.

I’ve gotten to do a lot of things I wouldn’t have otherwise had the chance to do at my age: go to a trampoline park, visit a fire station, watch a puppet show, skim stones on the Charles, and have a legitimate reason to play hours of video games. More importantly, it has given me a great person in my life.

We started off a bit awkwardly when Jaden was younger. We spent a lot of time doing more structured activities as we got to know each other. As our relationship has grown, we’ve become very familiar with each other and much more comfortable. Now we can just hang out if we want to without the need for anything specific to do. Also, Jaden now knows my wife very well and plays with my two sons. It is very much like we have extended our family.

What would you tell guys who are thinking about being a Big and might have hesitations?

I would tell them that it is absolutely worth it. Being a Big allows you to have a very real and personal impact on someone, and in turn for them to have an impact on you. I’m very happy that I made the decision to become a Big Brother, and I grateful for all of the memories we’ve made over the past 5 years.