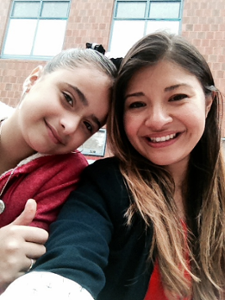 Ivett grew up in a rough neighborhood in Phoenix, Arizona. As a kid she remembers her single mom working two jobs to put food in her sibling’s mouths and struggling to teach herself English so she could succeed in school. In Ivett’s amazing story, she tells how despite all of the negative influences around her, she became the first person in her extended family to graduate from college and even more impressive, still gives back today. Now, Ivett is an employee at Big Brothers Big Sisters of Massachusetts Bay and a Big Sister to 10 year old, Jamarick. Read how she wanted to help a first generation Latina girl, like herself, beat the odds.

Tell us a little bit about you and your Little.

My name is Ivett Delgado and I’m 27 years old. I currently work at Big Brothers Big Sisters of Massachusetts Bay as a Community Engagement and Recruitment Associate. My Little Sister’s name is Jomarick and she is 10 years old. We’ve been matched for a little over a year.

What made you decide to become a Big Sister?

I grew up in a rough neighborhood of Phoenix, AZ as a first generation immigrant from Mexico. My mom was a single mother who worked two jobs to put food in our mouths.  I often spent time by myself or with my much younger sisters after school with not many activities or friends to hangout with. My mom spoke no English and I always had to rely on myself to figure out my own homework assignments. Since my mother and father had gotten a divorce, my mom decided she wanted to put some distance between her and my father and move to the US. It was tough to grow up without my dad in the picture, but it was even tougher to grow up in a country where I didn’t know the language. My neighborhood was not a pleasant place; gang members, drug dealers, and drive bys were a common thing.  When this is your reality and you don’t know anything better, it begins to feel normal.  But it is not normal and it shouldn’t be for any child regardless of your parents income or status.

Most people when they enter High School they are advised by their parents to be involved in clubs, sports, and to do well in school in order to get into a good college.  I had no such advice.  My mom attended school in Mexico and had no idea what US colleges required, nor did she understand my English speaking High School counselor.  Even with all the odds, I still managed to do well in school and was naturally interested in being active.  However, when it came time to apply for college I was faced with the reality that I simply could not afford it.  My mother was really supportive and did everything she could, including getting another job, to help me pay for it.

After a longer college experience than most, I became the first US college graduate in my extended family! Everyone was proud of me, but most of all I was proud of myself! I beat the odds for a person from my background and neighborhood. I avoided getting involved in gang activity, becoming a teen mom, and simply kept pushing forward. It was through my background that encouraged me to become a Big Sister. I wanted to help a first generation young Latina girl, like myself, to not face the same challenges I did.

What is your favorite memory or favorite day you spent with your Little? My favorite memory was of Jomarick and I’s first outing outside of school. We went to get our nails done and enjoy SoWa, in the South End. I remember Jomarick asked for Rihanna inspired nails that were bigger than her hands! Needless to say, she did not get Rihanna nails but did get Puerto Rico flag color nails (she’s from Puerto Rico). We then went to the food trucks in Sowa and tried a Mexican food truck. She had never had Mexican food… So we bought tacos and Jarritos’s soda (also made in Mexico). Before she tried it she mentioned that she was a picky eater and not to be offended if she didn’t like it. Well, she loved it! Her experience trying new things went so well, that every time we hangout we try new food she’s never had before. Sometimes it’s something simple like hummus.  She had never had hummus before, now she loves it!

Describe your relationship with your Little Sister. How has it changed over the past year?

Jomarick, is very special. She’s a fashionista and has an eye for what’s cool and what’s not, but she is one of the sweetest kids you’ve ever known. Our relationship began with talks about fashion and has developed to talking about school, advice on family, and friendship. We can sit down and talk about anything for hours.

How did working at BBBSMB help prepare you for the Match? Did the process meet your expectations? Working for BBBSMB helped me prepare to be a Big in a few different ways. I knew what to expect as far as how the process would go and how long it would take.  Most importantly it has helped me with some of the challenges my Little and I have faced. For example, just because I have time and want to hang out with Jomarick one day doesn’t mean she wants to. Just because she’s 10 doesn’t mean she doesn’t have any plans with friends and family. Knowing that this happens to other Bigs has helped me be patient and understanding when my Little can’t make an outing.

What have you gained from being a Big Sister?

What I’ve “regained” from being a Big Sister is the perspective of a 10 year and what  is really important in life.  Jomarick is really close to her mom, grandma, and younger sister. She’s an amazing Big Sister and that has thought me patience with my own sister. She’s also taught me that if you “put on music and dance, it makes you feel better when you’re sad.”

What advice would you give to a new Big in the program?

Be yourself and have fun, the rest is easy. 🙂