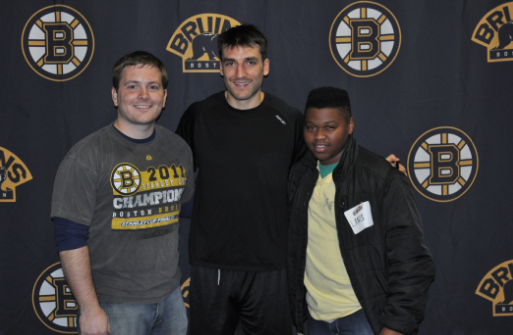 10 Inspiring Athletes Who Are Positive Mentors

Many athletes would not be where they are without the help of a mentor. In the case of Big Brothers Big Sisters of Massachusetts Bay, sports and athletes are also a popular topic that Matches bond over; their love for the Sox or Tom Brady will never waver! In this post, we highlight some of the best athlete mentors and celebrate the often dismissed correlation between mentoring and sports. The former Predator’s right winger is known on the ice for his clutch goal scoring and all-around game. Off the ice though, he is a mentor! A Big Brother himself with BBBS of Middle Tennessee, Joel was matched with his Little, Malik, and made a major impact in his life. After leaving Nashville in free agency though, their relationship could have stopped there, but Ward and the Predators would not let that happen. The Predators organization has stepped right in to provide mentors for Malik and become a second family for him. To learn more about this great story, you can read or watch here. No athlete can make it to the top alone, and the Angels MVP outfielder is no exception. Trout had many mentors that helped him from little league to the big leagues. Knowing that not every child is lucky to have this kind of support, Trout recently teamed up with BBBS of Orange County and the Inland Empire! In order to help more kids receive the same support he did, he wants to use his voice to encourage more Big Brothers everywhere. 4-time Super Bowl champion Tom Brady is a fiery, uber-competitive player on the field. Off the field, though, he is one of the classiest players and best role models in sports today. By following his career, there are many life lessons youth can learn from him. Overcoming adversity, the power of hard work and determination, and the importance of giving back to the community. TB12 sure didn’t reach this point alone, and he reflects on his longtime mentor Tom Martinez after his passing in this story here. Patrice Bergeron is everything you hope for in an athlete. He plays the game the right way, shines in the biggest moments, and is simply a leader both on and off the ice. Bergeron is constantly giving back to the Boston community, and was even recognized for this when he was honored with a community service award back in 2014. Bergeron’s charity ‘Patrice’s Pals’ brings patients from local hospitals and other children’s organizations to the TD Garden to experience a Bruins home game and even meet him following every game, win or loss!

Much like Tom Brady, Steph is a role model for youth simply in the way he carries himself as a professional, and the unconventional path he took to make it to this level. He has overcome much adversity through his career to now become the best player in the NBA (Sorry LeBron). And it’s not just on the court he makes a difference, as he received the 2013-14 Kia Community Assist Award from the NBA. He has made countless efforts to give back to the Bay Area, and most often with underserved youth in the area. Michael Oher is not just an offensive lineman for the NFC Champion Panthers. He is also the story behind the film: The Blind Side. Oher’s story shows us that with the help of a responsible, caring adult, any at-risk youth can reach their full potential. Sadly, much of today’s youth is in a similar position as Oher once was, but thanks to the help of Big Brothers and other mentors, they are able to find success in life and create their own ‘Blind Side’ story.

You would be hard-pressed to find any player or fan who has a bad thing to say about Larry Fitzgerald. The veteran wide receiver has long-been one of the top playmakers at his position, all while remaining humble and classy. He even received the 2014 Art Rooney award, recognizing his outstanding sportsmanship. Off the gridiron, Fitz established the First Down Fund to help fund positive activities for youth in the community, and much more. He has been recognized and awarded on numerous occasions by the NFL and sports writers for all of this work. CP3 is the best pure point guard in the NBA, and arguably one of the most underrated players in the past decade. The way he carries himself on and off the court causes not just aspirational youth to look up to him, but also his own peers in the NBA. Paul is often seen giving back to the community through his charity and particularly targets youth and families. To read more about Paul and other athletes thoughts on giving back, click here. The Dodger’s ace may not always shine when the spotlight is on him on the diamond, but when it comes to giving back to the community, he always comes through in the clutch. The southpaw created Kershaws Challenge to help provide a better quality of life and give opportunities to vulnerable, underprivileged children in LA, Dallas, Zambia and the Dominican Republic. Kershaw donates to the challenge for every strikeout he throws, and you can join him or create your own challenge here! It was not always an easy road to stardom for Seahawks QB Russell Wilson. He endured much adversity, including his height (5’11”), to become the starting quarterback and eventually a Super Bowl Champion. That alone is worth looking up to, but the way Wilson carries himself off the field is even more impressive. He is often seen in the community visiting Seattle Children’s Hospital and hosting various football clinics and events for youth in the area. He also started the Why Not You Foundation to help empower youth everywhere to believe in themselves and reach their full potential.