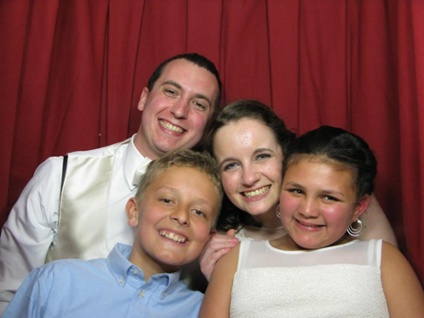 A Big Day Shared with Littles- A Cape Wedding to Remember

Becoming a Big is not just about mentorship, it’s also about celebrating happy times and forming lifelong friendships. Stephanie and Evan Haussman first got involved with Big Brothers Big Sisters of Cape Cod & the Islands in 2014 while they were dating, and now, two years later, their Littles are a part of their family. Stephanie’s Little, Tia, and Evan’s Little, Danny, were recently the life of the party at the Bigs’ recent wedding. Read more about these two incredible matches!

When two Bigs get married, of course their Littles are the first names on the guest list! At Stephanie and Evan Haussman’s recent wedding, their Littles, Tia and Danny, were there not only as mentees, but as members of the family.

“It was like they were our little cousins, not our Littles that we volunteer with,” said Stephanie. Tia and Danny were the “life of the party,” according to Evan, and spent much of the night dancing with the Bigs’ families.

For the newlyweds, mentoring with Big Brothers Big Sisters of Cape Cod & the Islands (BBBSCCI) was not just a way to give back to the community, but a program that had an impact in shaping who they are as individuals. The impact was so great, in fact, that the couple decided to donate the money they would have used for party favors to the BBBSCCI program.

“I was never a fan of traditional favors. I think that people just throw them out at the end of the night, so I’d rather our money go somewhere where it can be used,” said Stephanie. “It just seemed like an obvious choice.” The couple first got involved with BBBSCCI in 2014 when Stephanie, then Stephanie Greavers, decided her time would be best spent with a Little in her community. That’s when she met Tia.

“Seeing how grateful she is to just spend a couple hours with me gives me this incredible feeling. That showed me that you can be grateful for the little things and even giving just a little bit of your time can make a huge difference to someone,” said Stephanie. “I don’t think I’ve ever seen that in action before.”

A year later, Evan got involved. He noticed how much Stephanie and Tia were enjoying their time together and realized just how fun it was. In 2015,  BBBS matched Evan with Danny.

“When I met Danny, he was very nervous, very shy,” said Evan. “We went for a walk, got to know each other a little bit, planned our first outing, and now he has no problem. He’s not shy at all. It takes some time for them to warm up which is like any other friendship.”

The two now spend days playing laser tag, swimming, and going to football games. On rainy days, they compete against each other at video games. Though, according to Evan, it’s not much of a competition.

“He’ll beat me at what ever game he wants to beat me at,” said Evan. “I don’t want him to think of me as a volunteer. I’m his friend and support whenever he needs me. I want him to be assertive, and I want him to feel comfortable,” said Evan.

“If I can show her that she is important, then I will have done a great job,” said Stephanie.

Stephanie and Evan got involved with BBBSCCI to make a difference, but they made lifelong friends.

For more stories from Cape Cod & the Islands go here.