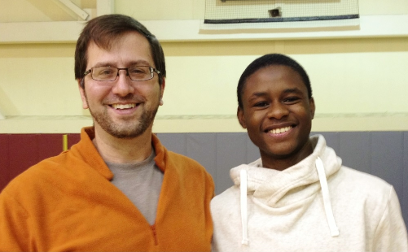 A Little Brother’s Ambitous Journey from West Africa to Boston

Little Brother Alpha grew up in the West African nation of Sierra Leone. After surviving a rebel attack at the age of 3, Alpha’s life transformed from a homeless child, to a thriving student at Boston College High School. Read about Alpha’s amazing journey from Big Brother Kevin’s perspective and the role he played as a mentor and friend in Alpha’s life.

My name is Kevin and I’ve been a Big Brother for almost 15 years; Alpha is my third Little Brother, and the two of us have been matched since 2009. I first met him on an extremely snowy day in December of that year. I didn’t realize that it hadn’t been all that long since he had seen snow for the very first time.

Alpha grew up in the West African nation of Sierra Leone; if you know where western Africa bumps out into the Atlantic, you know how to find Sierra Leone. It’s a beautiful country that for 11 years was gripped by a brutal civil war which left 50,000 people dead.

Alpha’s home town was attacked by armed rebels when he was 3 years old. He and his younger brother were at home with their father at the time, as their mother was across town braiding their grandmother’s hair. Their father was able to get both boys out of the house and into the forest in time to save their lives, but they had no way of knowing what happened to the boys’ mother.

Meanwhile, their mom was taking shelter in her own parents’ home when her father arrived with the worst news possible: he told Alpha’s mom that her husband and both of her sons had been shot and killed by the rebels. She insisted on running home to see their bodies, but her father forbid it;  it would have meant her death as well. Her family gathered what they could carry and fled north, Alpha’s mom believing that she was a widow and that her family was gone.

Why’d Alpha’s grandfather lie? I don’t know; he passed away from illness in the refugee camps without ever telling the truth. If I had to guess, it would be that Alpha’s mom was Muslim and his dad was Christian, and he didn’t approve of the religious difference. There’s no way to know, but it’s tragic regardless.

Six years passed. Alpha’s mom emigrated to Boston and gained her citizenship; She had lost her husband and sons, but she worked hard to rebuild a new life as a baker in Boston. Then one of her friends headed back to Africa to track down lost relatives—and ended up discovering that Salay’s husband and boys were alive! Alpha was still with his younger brother and his father. As you can imagine, after talking to them Alpha’s mom dropped everything and flew to Africa to see them. At first she thought she’d move back to Sierra Leone; instead, together they decided to have her family emigrate to Boston. Alpha’s mother reluctantly left the family she’d magically regained and flew back to Boston to begin the emigration paperwork—and before she could return to Africa to visit them a second time, Alpha’s father died of illness. The boys, now ages 10 and 8, were left homeless on the streets of Sierra Leone, and their mother was 4200 miles away on a different continent.

A local family was paid to take care of the boys; the family stole the money, moving the boys around from house to house. It was up to Alpha to watch out for his younger brother and keep both of them safe. All sorts of bureaucratic red tape delayed emigration; officials refused to look at the DNA results, paperwork was piled on top of paperwork, and despite superb immigration and refugee advocates helping, it looked like the family was never going to be reunited. Finally, Somerville politician Michael Capuano intervened to get the boys reunited with their mother here in Boston.

Nowadays? Alpha may not have known how to read when he came to Boston, but he made up for lost time. He’s at Boston College High School (and formerly at Nativity Prep) and he’s doing incredibly well, excelling at both sports and studies.  It won’t be long before we start to look at colleges, something made much more possible throughMass Mentoring’s KELLY Award. And best of all, Alpha and his entire family are a constant source of friendship and inspiration to me. It’s a good reminder that life owes us nothing, but miracles can still happen. I’m honored to be a part of this one.

Kevin Kulp is a Boston-based author and game designer. You can find him at@kevinkulp or kevin.kulp@gmail.com.