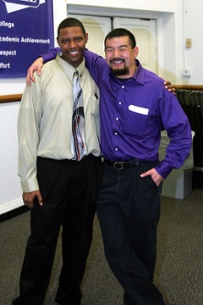 Joe’s mother wanted to give Joe the attention he needed growing up, but with a newborn at home, she knew she would need help. She got this help when she signed him up to be a Little Brother. All Joe needed was a positive adult role model, but as he and his Big bonded over their love of baseball, it grew into a lasting friendship. Now, 16 years after being matched Joe and his Big Brother, Robin, share their story.

A Little Background on Robin and Joe

My name is Robin Chan, and I am a 36-year-old photojournalist for Gatehouse Media in the South Shore where I live in Quincy. My Little, Joe, and I were matched for 10 years. Our match started in February 1998 and ended when Joe graduated from high school in 2008. Our relationship has grown into a friendship. He is the best first baseman in our softball league. Joe graduated from Bridgewater State University in 2013. He worked at City Year this past year and now he has a full-time job at Bottom Line. He was born and bred in Boston and is an avid Patriots fan. Joe’s mom was giving birth to his middle brother and she knew that she wouldn’t have the time to give Joe attention so she signed him up for Big Brothers so he could have a positive role model.

I joined the program when I was a freshman at Boston College. Joe is my second match after my first match moved to New Orleans. Joe and I were matched when I was a sophomore at BC. During my first meeting with Joe, I took him to a Boston College men’s basketball game, and it was actually my birthday so he gave me a present. When asked him how he felt at our first meeting Joe responded with, “Dude, I was 8; I didn’t know what feelings were at that time” it was funny. Joe thought the food was free at the concession stands and that it was great that I could pick up good food so easily. He thought, “I’ll definitely go to college.” If I remember correctly, our first meeting was pretty easy going. We both think our relationship has progressed into a friendship. He is quite comfortable teasing me and offering advice now.

There are many memories that stick out: like the time Joe won a Red Sox jersey from Big Brothers to seeing Joe hit mammoth home runs whenever his mother comes to watch our games, to hanging precariously from a rusting ladder to get water samples from the Charles River for his science project. However, we both share the same favorite memory of when Joe and I played a pickup game of touch football with my college friends. My college friends made Joe feel right at home playing with the guys. During the game, I happened to be running with the ball and Joe was lining me up in his sights to make the tackle. I tried to do a stutter step to elude his tackle; however, the ball had other ideas. When I made my move, the ball flew up in the air and landed on the ground with a thud. Joe saw it fly out, but couldn’t get the fumble because he was doubled over laughing at my expense. He was laughing so hard that I started laughing too. One of my college friends picked up the fumble.

Learning from Each Other

I have learned that what may seem like a little thing to me may in fact be a big deal to Joe. For instance, I was hanging out with Joe in my common room at BC, and my roommate was there. He made giant paper airplanes out of poster board, and Joe had a blast. It didn’t seem like a big deal, but he remembered that moment for quite a while – so you don’t have to impress your little with crazy unique experience, but it’s more important that you spend time with your Little. More importantly, I learned from that experience that young children are quite impressionable and have good memories so you should try to be mindful of what you say or how you say things.

From me, he has learned to pay attention to detail and to go the extra mile at school for projects. Sometimes the little things mean a big thing. A card means more than buying an expensive gift.

Big Brothers created the opportunity for me to have a lasting friendship with Joe. We took advantage of the free tickets that Big Brothers has. I also realize that being a mentor is an easy way to make a significant impact on a person’s life.

Some Tips for Other Big Brothers