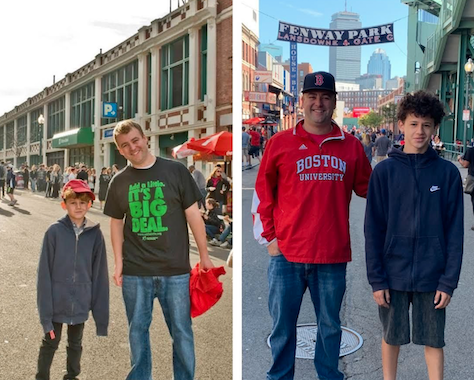 IPSWICH, Mass. – Big Brothers Big Sisters of America has named Ryan Callahan, 33, of Ipswich, the Massachusetts Big Brother of the Year. He is one of 480 volunteers for the national nonprofit to be recognized in each of the 50 U.S. states for their outstanding commitment to developing caring and life-altering one-to-one mentoring relationships with children.

Diaz, described by Callahan as a kind, creative and generous young man, hails from a single-parent household. The middle child of three siblings, his mother Jackie enrolled him into the nonprofit’s signature community-based program in which adult mentors are paired with children, ages 7 to 12, and meet for a few hours a couple times a month at a location of their choice, as a way to expand her son’s horizons and offer him a strong and consistent male figure in his life.

“Early in our match, I found out that Nemi creates and produces unique animations,” says Callahan, who was paired with Diaz by the agency based on shared interests, geography and personality. “This gave us a shared passion as earlier in my career I had produced videos for ESPN. After I learned I may be mentoring the next Spielberg, we went to every possible movie we could. Nemi is such a creative person and seeing these movies seemed to harness that energy. After each, we would dissect the characters and talk about the animations.” Now a sophomore in high school, Diaz is thriving academically.

The first thing the duo worked on together was building Diaz’s confidence. Growing up, Callahan had teachers, coaches and church sponsors as role models to look up to and learn from. He credits his high school tennis coach for reinforcing the idea of positivity and maintaining a strong mentality during adversity. He wanted to instill the same wisdom into Diaz as his Little Brother explored the world and realized his own dreams.

Over the past five years, the Big-Little duo has done just about every activity a match can do – swimming, biking, ice skating, rollerblading, sailing, kayaking, rock climbing, bowling and so much more. Through good times and in challenging times, such as when Diaz’s mother was diagnosed with cancer, Callahan has been by his Little Brother’s side. As it turns out, after he completed school his own mother was also diagnosed with cancer- and beat it. He knew exactly what Nemi was going through, and after 5 years of friendship, the trust that they had built enabled them to talk openly about Nemi’s experience of his mother’s diagnosis. The solid foundation they built allowed Ryan to step up and support Nemi in exactly the way he needed during this most challenging time.

“This program has given me a strong sense of self purpose that has helped to define me both personally and professionally; everything I have given to this program has given back to me tenfold,” says Callahan. “I am grateful that Big Brothers Big Sisters of Eastern Massachusetts has given me a bond that will last forever. I am confident Nemi and I will continue to laugh through the good times, but we have also built a foundation to stay positive through the tough times. We are truly ready to tackle anything life throws at us as Brothers.”

Big Brothers Big Sisters of Eastern Massachusetts works to inspire, engage and transform local communities by helping youth achieve their full potential through professionally supported long-term one-to-one matches. The nonprofit coaches Bigs, Littles, and guardians to support the development of the 6 C’s– Curiosity, Character, Connection, Caring, Competency and Confidence. Progress is measured throughout the match and targeted support is provided to solidify growth.

“Match relationships like the one of Ryan and Nemi are inspiring and why we do what we do,” says Mark O’Donnell, President and CEO of Big Brothers Big Sisters of Eastern Massachusetts. “Nominating Ryan as the Big Brother of the Year representative from our agency was a no brainer. He is a compassionate role model and friend to Nemi who is helping him to live up to his fullest potential.”

In its 70th year, Big Brothers Big Sisters of Eastern Massachusetts has created and served more than 20,000 matches. This school year, the nonprofit aims to serve 3,600 youth. For more information, visit: www.emassbigs.org.

Big Brothers Big Sisters of Eastern Massachusetts is an innovative, energetic organization that is making a real difference in the lives of nearly 4,000 youth annually by providing them with an invested, caring adult mentor in long-term, professionally supported relationships. With research and proven outcomes at its core, Big Brothers Big Sisters of Eastern Massachusetts is working to defend the potential of children facing adversity and ensure every child has the support from caring adults that they need for healthy development and success in life. The organization’s vision is to inspire, engage and transform communities in Eastern Massachusetts by helping youth achieve their full potential, contributing to healthier families, better schools, more confident futures and stronger communities. Throughout its 70 years, the largest Big Brothers Big Sisters affiliate in New England has created and served more than 20,000 matches. For more information about the agency and its mission, visit www.emassbigs.org.