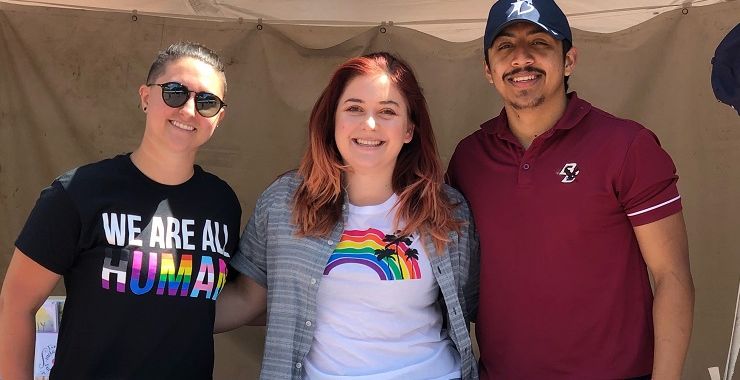 A Proud BBBSMB Presence at the Boston Pride Festival

We asked Big Brothers Big Sisters of Massachusetts Bay staff member, Jamie Lefebvre for a recap from our first year at the Boston Pride Festival. Thanks Jamie for organizing our agency’s presence at the festival and sharing your thoughts about the day!

Why was it important that BBBSMB have a presence at the Boston Pride Festival?

Nationally, BBBS of America, led the nation in including the LGBTQ+ community in their non-discrimination policy, which was very controversial for a youth serving organization. We have a proud history as an organization of welcoming and serving the LGBTQ+ community, however it was not widely known. We wanted to make sure that our community here in Boston and the surrounding areas knew that we were here to support them as an inclusive organization. That is why we felt it was important for BBBSMB to show our support at the Boston Pride Festival for the first time as an agency.

If you have ever been to a Pride event, you know how exciting the day can be. Even at 8am, as I was pulling up to the Pride Festival, I could feel the excitement and passion in the air. The LGBTQ+ community brings such a colorful force to any city and space that welcomes them. It was beautiful to see a wide range of people coming together to celebrate themselves and each other. I talked to a few friends, who do not identify as LGBTQ+ but came to support me, who said that the experience brought tears to their eyes and opened up a world of new perspectives for them – and I feel as though that is the true power of Pride.

What was your favorite part of the day? Did you have any conversations with people that stood out or were memorable?

My favorite part of the day was talking with potential Bigs and even some parents/guardians that came by the table for more information. As expected, a number of people thought that they would not be accepted as volunteers because of their sexual orientation. I heard a lot of comments, “I have wanted to volunteer for years but thought I would not be accepted because I am gay.”, which was not surprising due to our binary name and the stigma against LGBTQ+ adults working with youth. Therefore, having those conversations and being able to proudly say, “no, your sexual orientation is not going to disqualify you as a potential Big”, and then seeing the joy on their faces was very moving. Many of those potential volunteers also said that they would definitely be spreading the word to their friends and family who have also wanted to volunteer and give back to the community. What did it mean to be at the Boston Pride Festival for the first time representing our agency?

Representing BBBSMB at the Boston Pride Festival this weekend was very rewarding; both personally and professionally. Personally, I feel that Pride is about celebrating our diversity, bridging the gap between our differences, and being proud of the courage it sometimes takes to be ones true self. You can really feel the excitement in the air during Pride. It is a powerful and moving day and I was very excited to be part of it this year. The Pride Parade and Festival are really unique and empowering in that there is a sense of community, which as an agency we can definitely relate to.

Not only does Pride align with our agency’s sense of community, but I think that representing BBBSMB at Pride also speaks volumes to our agency’s desire to support and empower their employees to grow personally and professionally. When I spoke about wanting to be present at the parade, I felt heard and validated – technically the table for the Pride Festival was solidified while I was on vacation, and our amazing staff did not let this opportunity slip through their fingers. They knew it was not only important to me, but important for us as an organization to show up for the LGBTQ+ community. I am truly honored to be part of an organization that supports their employees and community, and I wanted people to know, especially those in the LGBTQ+ community, how much BBBSMB cares and strives to make a difference.