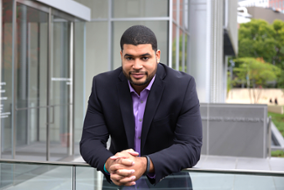 Duane de Four is a media critic and an educator for preventing sexual assault and promoting sexual health education. His blog, How Manly, explores the ways traditional gender roles are portrayed in the media. In addition, he was a Big Brother withBig Brothers Big Sisters of Massachusetts Bay. Here he shares his rewarding experience as a Big Brother, an analysis on why more men aren’t volunteering and a review of BBBSMB’s Chicks Dig Bigs Campaign.

“Are there sharks in the Charles river?” my little brother (or “Little” as the folks at Big Brothers Big Sisters like to call them) asked as we drove over the Charles. It was a simple question that was so much more than a question. It was a glimpse into the mind of an 11 year old, even more importantly it was a breakthrough moment for us. I couldn’t help but smile as I answered; “you bet!” I told him, “tons of them. And they like to jump up and eat people who walk slowly across the bridge.” (okay, I’m just kidding. I told him the truth about the lack of sharks in the river).

It was only our second time hanging out and I was already figuring out that my new little brother was a quiet kid. Despite this, during our 4 years together I provided him with the opportunity to get out of his house for a bit and do something that was just for him (and hopefully fun) on a semi-regular basis. You see, his mother was in-and-out of the hospital which required him to sacrifice much of his own interests to watch his younger sisters frequently. Did I make a huge difference in his life? I don’t know… you’ll have to ask him that. But I do know this; he was always excited to see me, sad to say goodbye and he always reported enjoying our time together to both his mom and the match advocates at Big Brothers Big Sisters of Massachusetts Bay who kept tabs on our relationship. Yeah, I found my match challenging at times, but he was also a great kid. And if anyone asks me whether or not they should be a “Big” my response is always an emphatic, unequivocal YES!

Back when I was a Big, I knew there was a shortage of male volunteers, particularly men of color. Knowing that influenced my decision to sign-up in the first place. But as it turns out, the situation is even worse than I realized. According to Big Brothers Big Sisters of America; “More than 70% of children waiting for a Big are boys, but only 3 out of every 10 inquiries to volunteer come from men.” This got me wondering… why?Why are so few men volunteering to be Big Brothers?

In an attempt to solve this riddle, I started by looking up overall volunteering numbers. According to the Bureau of Labor Statics, in 2013 “…women continued to volunteer at a higher rate than did men across all age groups, educational levels, and other major demographic characteristics” (22% for men vs. 28% for women). This gender gap in volunteering is a larger discussion than I want to have right now, besides much has been written about it already… so let’s shelve it for now. Thing is, the 6 point difference in overall volunteering numbers can’t fully explain why there are so many more women than men looking into Big Brothers Big Sisters programs. This calls for a deeper dive into the Bureau’s volunteering statistics. When comparing what sorts of volunteer work men and women take on, the report reveals this nugget of information (emphasis mine):

…Collecting, preparing, distributing, or serving food (10.9 percent), fundraising (10.0 percent), and tutoring or teaching (9.8 percent) were the activities volunteers performed most frequently for their main organization. Men and women tended to engage in different main activities. Men who volunteered were most likely to engage in general labor (11.4 percent) or coach, referee, or supervise sports teams (9.9 percent). Female volunteers were most likely to collect, prepare, distribute, or serve food (12.5 percent), fundraise (11.5 percent), or tutor or teach (11.4 percent).

So basically, volunteer activities generally follow traditional gender roles. According to these figures, men tend to fill the more active, physical, traditionally “manly” roles while women tend to stick to the more nurturing, supportive, traditionally “feminine” ones. Not all that surprising actually. People choose to volunteer in whatever way is most meaningful to them (or at least they should). So if a man wants to coach or be a referee then by all means, he should do it.

Maybe men are drawn to coaching, etc. because they’re known quantities, something familiar for most men? The odd thing is that coaching and refereeing can be weekend devouring and/or daily activities. The time commitment for Bigs on the other hand is relatively minimal. If I remember correctly, I was only asked to hang out twice a month, for a couple of hours each time… anything beyond that was purely by choice. Whatever the reasons, it’s clear from the statistics that one-on-one mentoring, the type of experience being offered by Big Brothers Big Sisters, is something that far too many men are overlooking. It’s a shame too because the majority of boys waiting to be matched are enrolled because someone… usually a mother, wants them to have a positive male role model.

Speaking of mothers, women in my life (like my mother) were always very encouraging, supportive and in many ways respected me more for being a Big. Apparently I wasn’t the only Big Brother to have that experience because the folks at Big Brothers Big Sisters of Massachusetts Bay recently launched a campaign highlighting this very fact. The “Chicks Dig Bigs” campaign attempts to attract guys by noting that women tend to have more respect for a man who volunteers with kids.

Personally, I dislike the tag line. Particularly the use of the word “chicks.” But despite how it sounds, the organization is not actually saying “hey guys… being a Big will get you laid!” Instead they’re saying all women… mothers, grandmothers, sisters, etc., appreciate a man who volunteers with kids. So despite my reservations regarding the tag line, I fully support their efforts to redefine one-on-one mentoring as a masculine activity that earns respect. While the folks at Big Brothers Big Sisters of Massachusetts Bay work that angle, I’ll continue my work to deconstruct and rebuild societal definitions of masculinity so this isn’t an issue in the first damn place. Maybe together we can help change these skewed volunteering numbers and get more men interested in one-on-one mentoring.

If you’re like me, trying to redefine masculinity in more positive ways, then consider volunteering or at least encouraging other men in your life to sign up. Because if we want to create new, more open and less violent visions of masculinity, then we need to step it up and help guide the generations behind us. Even if you consider yourself to be just an ordinary guy trying to get by in this world, then you too can volunteer… Who knows, it just might gain you a bit more love and respect from the women in your life, now or in the future.

If you’re ready to volunteer, you can sign-up to be a Big Brother here

To read more articles related to masculinity in the media by Duane de Four, visit his blog, How Manly

If you’re interested in learning more about opportunities for men of color, check out this video: