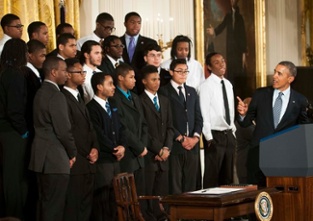 As a Chicago native, President Obama’s “My Brother’s Keeper” campaign hit home for Mike Omenazu. Having grown up in a difficult neighborhood but with the benefits of role models to guide his journey, Mike is now a Big Brother of 2 years and an active member on BBBSMB’s Diversity Council. Read his insights on My Brothers Keeper below.

“If we don’t keep going, what happens to these kids?”

President Obama posed this question while referring to his experience as a community organizer in Chicago.

For those of you who missed it, a few weeks ago, President Obama announced the “My Brother’s Keeper” campaign, an initiative specifically aimed to improve outcomes for young men of color. Joined by a group of young men which included representatives of an anti-violence program in the same city in which he used to work, Obama explained his personal connection.

“When I was their age, I was a lot like them. I made bad choices. I didn’t take school as seriously as I could have. I made excuses. I could see myself in these young men. I had people who encouraged me, they never gave up on me so I didn’t give up on myself” Obama said.

As I watched the campaign unveil, I couldn’t help but be reminded of myself. I grew up in Chicago, notorious for its gang and gun violence and like Obama, I saw that these kids have limitless potential with a limited view of what’s possible.

I had mentors in my life who showed me the way and whom I directly attribute my positive development too. I credit them for why I am a Big Brother today and why I have so much passion for this cause and campaign. I know the stats; black males are more likely to fall behind in school and eventually drop out, be sent to prison or end up murdered– and this campaign does nothing short of propel the work that organizations like Big Brothers Big Sisters have already been doing for over 100 years.

Finally, as we await more details, I can’t help but feel proud to see my personal role model, Magic Johnson, the entrepreneur, not just 5-time champion and Hall of Famer, in attendance pledging his philanthropic support for the cause. Because of men like Magic Johnson, and now me, my Little can see the big picture. He can see himself graduating from college as an expectation more so than an exception. He can see a future with a possibility of contributing to his family and to his community, and for that I’m grateful.

Watch our call to action for Men of Color: