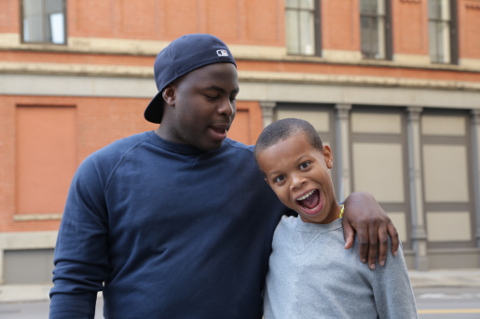 Having grown up in an environment filled with adversity, Big Brother Mike had caring adult role models who believed in him throughout his childhood. Now, after being matched with his Little Brother Azul for 2 years, he’s speaking out for the Chicks Dig Bigs campaign in an interview with our staff in hopes of encouraging more guys in Boston to volunteer.

Tell us about your involvement with the “Chicks Dig Bigs” campaign.  Why did you decide to participate with your little?

The “Chicks Dig Bigs” campaign was an amazing honor to tell the public about how amazing this program is. I have been an active champion and advocate of the organization so I enjoy any opportunity to talk about how amazing it is. Also, my Little Azul is a star, made for the camera. The chance to get him on film was one we couldn’t pass up!

The campaign hopefully increases awareness and gets others to join in the program.

I decided to become a Big Brother because I grew up in an environment similar to the ones many Littles live in. Being born and raised in Chicago, a city unfortunately notorious for many problems, specifically a high homicide rate and gang activity/violence, I was able to avoid many negative influences through programs similar to Big Brothers Big Sisters. I have benefited from having caring adults who invested their time in me and witnessed firsthand the power of the program. I know the program works.

After graduating from college, I decided to serve in AmeriCorps, a nationally transformative community-service initiative. I was placed at Big Brothers Big Sisters with the project scope of recruiting more males, specifically ones of color. My position involved serving as an external champion of the organization articulating and exhorting others to join. By working to convince others, it solidified my passion for the program and I knew I had to sign up immediately!

When Azul and I first met, he stayed in the corner and initially refused to come out  to meet me. This raised doubt and I became concern we would have trouble getting to build a relationship. This immediately changed when our Big Brothers support staff encouraged us to step outside and walk around the block. Within minutes, his entire disposition changed! He became more engaged and conversational and that trajectory has remained the same since. We continue to have fascinating talks and have gotten to know each other on such deep, personal and substantial levels – more than many of my friends.

It’s been close to 2 years that we have been matched our relationship continues to grow and evolve.

What have you learned from your little? How have you grown as a person because of this relationship?

My Little, Azul, has taught me so many things. One of the best lessons I’ve learned from him in varying ways is to enjoy and appreciate the “little” things, pun intended.The sincere and authentic enthusiasm he brings to even the most simplest things is a great reminder for the times when we can easily get caught up in the day to day.

I’ve grown so much as a person because he constantly pushes me to look at things from different perspectives and to value differing opinions.

Azul has learned that he will NEVER beat me in basketball regardless of how big he grows. My pride will NOT allow it. In all seriousness, he has learned the importance of keeping your word and the value of commitment. Already at his young age he has a lot of responsibilities and while it can be tough, he has improved in honoring them whether with his family or at school.

We can hang out anywhere and do anything and enjoy our time together because we will goof off and make our own fun!