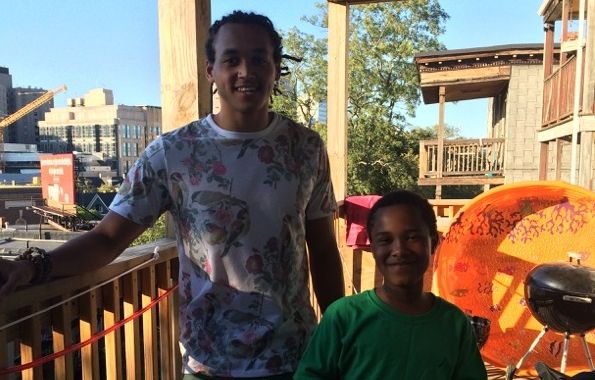 The Big-Little relationship is all about experiencing new things, being there for one another and most importantly…having fun! After 8 months, Big Brother Chaney and Little Brother Kaden have already experienced much of this. As a “normal” match, we spoke to Chaney about his friendship with Kaden. He talks about their most memorable experience doing yoga together and what he hopes to instill in Kaden as he grows older. Enjoy!

What was the first time you and Kaden met like?

It was a really hot summer day and I biked to his house in Mission Hill. We were waiting outside his house and initially they weren’t there which was pretty funny. We were just waiting outside and I saw this family coming up the street and I remember reading their description—I knew he had a sister and two moms—so I didn’t approach them at first, but I thought it was them. After a few awkward glances we realized who each other was and that’s how we first met.

How have you seen your relationship grow?

I think it’s pretty awesome. He’s really energetic and I like to be athletic and active as well, so we’re always high energy, laughing with each other, and going all over the city experiencing new things together which is pretty cool.

What has being a Big taught you?

Prior to being a Big I didn’t really have experience hanging out with kids too much. I have a little sister, but that’s just like a whole other realm that I was able to experience and learn the ins and outs of hanging out with kids and stuff like that. A lot of things that we’ve done together have been firsts for me as well, like going to yoga or visiting museums around Boston, so it’s definitely been a great learning experience in that regard.

You guys recently tried yoga for the first time together. How was that? It was actually really funny. I didn’t do too much research before, but I saw a $5 yoga class that looked cool, so went there and at first the lady was a little hesitant because it was an adult yoga class and I had no idea that there was a difference between adult and kid’s yoga. She was just like, “No worries! We’ll set you guys up in the back of the room and if he gets too antsy or bored then you guys can leave or take a break.” So we entered the room and at first he was kind of bit shy, because there were a bunch of people in there, but once we started going we had a lot of fun. It was actually a lot harder than I expected and I was falling all over the place, looking around to see how everyone else was doing it. We were having fun giggling and laughing at each other. The class was an hour and fifteen minutes and we actually made it for the full hour, which I didn’t expect. I thought we’d last maybe 20 or 30 minutes and Kaden was actually way better than I was at yoga and doing all of the moves. We left before the meditation portion of the class which probably would’ve been a bit harder for him to do, but I was really impressed that we did the entire class together without any interruptions.

What are a few of your favorite activities to do together?

He like’s going to the playground a lot. No matter what we do, if there’s time at the end he’s always asking if we can do 15 or 20 minutes at the playground. Either near his house or anywhere we are, so that’s definitely something he enjoys doing. We also went rock climbing twice, but that’s the only thing we’ve done more than once. That’s also a favorite activity of his. He’s really good at climbing which is awesome.

“Nowadays there are so many different negative things that are shown as positive and it’s hard for young kids to know somebody who they think could be a cool person, but is also doing good things in the community or just has their head on straight.”—Big Brother Chaney

If you could describe Kaden in one word, what would it be?

I wish I knew a lot more words! I would say ‘excited’. I know it’s a pretty bland word, but the reason why I chose excited is because everything he does he has high energy and everything we do he’s really excited for. Even when we’re in the car going to our location he talks with such excitement and is genuinely excited for life and everything we do. Which is really cool, because I can be pretty laid back, so when we’re together it’s a really good match.

How do you see your relationship with Kaden developing moving forward?

I definitely see us being in contact for the long haul. I don’t know how he feels about it, but it would be hard for me to just stop everything after a year. I’m still pretty young, so my life can really go in any direction. I could end up moving for work or something like that, so I don’t really know too far in advance, but if we’re in the same state I’m going to make sure that I’m able to maintain our relationship and hang out with him as much as possible. Even if it’s just once a month and if I move out of the state, we can still talk on the phone and when he gets older we could text and stuff. I definitely want to be someone that he can reach out to at any time, even if we haven’t talked for a while.

Is there anything that you hope to instill in Kaden?

My biggest thing, especially when I was growing up, is just having an older influence that’s cool and doing the right thing. Nowadays there are so many different negative things that are shown as positive and it’s hard for young kids to know somebody who they think could be a cool person, but is also doing good things in the community or just has their head on straight. You know, just something that he can look back on when he gets older, if there are ever any weird situations, he can remember that there are good people out there who aren’t doing the wrong thing.

What would you tell others who may be interested in becoming a Big, but may have hesitations?

I didn’t know much about the program when I first got involved, but the amount of support and how good you feel giving back to the community should definitely be highlighted and people should know more about it.