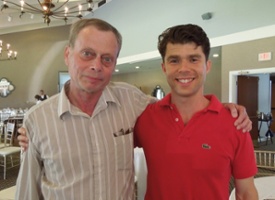 Allen, like any other young boy in a tough home, just needed a role model to look up to and a friend to laugh with. After his father left, he struggled to find that person – until he met his Big Brother, Paul. Here, Allen shares his story of how his Big Brother became his hero and the missing piece in his life – inspiring him to get a great education and start an amazing career. This is his mentoring real life story.

My father walked away from his 3 boys, as we sobbed uncontrollably in a Boston courthouse hallway.  Through our tears, we begged him to let us see him, and promised we’d be good.  Like any 8 year old, I just wanted to see my dad.  His response was cold and hard: “Not until you boys are 18 years old”.  It would be almost 20 years before I would see him again.

And just like that, my mother became a single mom of 6 young boys.  We lived in the Brighton area of Boston, back when Brighton was tough.  We received WIC, food stamps, and the occasional welfare check.  Violence was everywhere – on the streets, and inside our home.  Life for my family was hard.  And then, at only 16 years old, I was thrown out, because I spoke out against the violence.  I found myself unwanted and alone.

Despite these obstacles, I did not succumb to my childhood turmoil.  I fought against it.  I rejected it.  And I was led away from it. You see, 26 years ago, one year after my father walked out on us, I was matched with my Big Brother, Paul.  I was 9 years old, and had been having a hard time (as all of my brothers were) adjusting to our new not-so-happy life.  Paul came into my life just when I needed him the most.  And then, amazingly, he showed up again and again.  He showed me that he cared.

Paul is a systems engineer, and worked for Raytheon at the time (he is now an engineer at Dell).  He became the only educated person in my young life to whom I could talk, as well as a moral compass that I could look to for guidance.  My Big Brother became a light, flickering in my very dark and very sad world – a light that helped lead me towards a better life.  As I grew up, I could count on Paul to take me out and really listen to what I had to say.  We would go out and just have fun together.  During this one-on-one time together, Paul consistently showed me that I mattered.  And this, above all else, made the difference.

Paul took me out, regardless of the shenanigans that I might have put him through the time before.

Of all the memories I have with him, one memory sticks out in particular. We decided to go to the Boston Harbor Islands in the middle of winter.  Not heeding Paul’s warning, I was showing off my rock hopping skills, and found myself accidentally plunging 15 ft. into the icy harbor! Poor Paul quickly pulled me out of the water, and together, we got to ride the boat back to Boston from inside the heated captain’s deck.  Not all of our moments were this dramatic, although each moment was special.  We baked cookies, we went to the movies, we went for hikes, and we even changed car batteries together (since Paul’s car battery died during our very first meet-up)!

Fast forward 26 years, our match has obviously transformed into something far more beautiful.  Paul and I are family; we are there for each other.  We meet up every few months for dinner and a beer, and we talk on the phone every few weeks.  And every Father’s Day, it’s Paul that I send a card to, or call on the phone.

I have an amazing 7-yr old daughter, who is happy, smart, and kind, and will never know what it feels like to watch her dad walk out on her.  I am engaged to Diana, a truly exceptional woman (she’s the only person ever from her public high school to go to Harvard!), a loving step-mother, and my best friend.

And about a year ago, Diana and I launched our own company, called NELSA.  We are a consumer product company infusing real math and real science into the design of everyday consumer products that make life easier for our customers.  I thoroughly enjoy the life of an entrepreneur, with all its ups and downs, from the excitement of launching a new product, to the challenge of raising angel financing (as we are doing now).  I feel fortunate that through my difficult childhood, I developed my foundation – extreme endurance and perseverance, and a deep desire to always do good.

I have come a long way from my hard beginnings.  Paul would tell you that he is just a regular guy, who just showed up.  But not me, when I look at Paul, I see my hero.  My Big Brother, Paul, became my unfair advantage when life was stacked against me.  He was there just enough to tip the scales, edging me closer and closer to a better life.