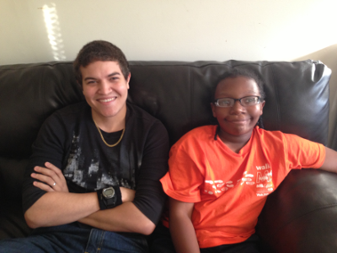 Scott Howard Jr. is a 24 year old from Peoria, Illinois who was having some
trouble adjusting to the new city of Boston. After finding his place with Mosaic Boston, he knew he wanted to give back in a more meaningful way by encouraging more organizations to make a difference in their communities through the Big Brothers Big Sisters of Massachusetts Bay program. Read about Scott’s experiences as a Big Brother to Little Garrell and his hopes for expanding community outreach across Boston.

I became a big because I felt like it was time to give back. Not only that, but I love kids immensely. My niece is the light of my life and I wanted to be able to provide a stable friendship for a kid that needed it much like my grandparents and parents did for me.
Describe how it was meeting your Little for the first time. How has your relationship changed over the years?Let’s see. When we first met, Garell and I would hit a comic book shop and go bowling. It was a blast! We had so much fun, but it was difficult at first because of the awkward nature we had to initially get over with time. Now we’re like real siblings, joking, laughing, and breaking into tears during jokes even. It’s been a wonderful and endearing experience to say the least.

What is your favorite memory of you and your Little Garrell?

My favorite memory of me and my little is the first time we played Lego Marvel superheroes together. I recently got a PS4 and it was the first game I got so we could play it. Garrell studied videos before our hangout session so that he could do the best he could while we faced off against the bosses. I was impressed and it was funny.

Has your Little learned anything from you? How have you seen him grow?

Garell seems to take in things like a sponge (except Ice Skating that didn’t work out well). I think he’s learned that hanging out with an adult is actually pretty fun and I think I may have given him my love of literature which is great. He already loves books, but you can never have too many right?

How are you involved with Mosaic?

I am currently the Community Group Administrator for Mosaic as well as a Member. Also, I am taking leadership courses with Jan and Shane (Our pastors).

Why do you think other members of Mosaic and similar organizations would make great Bigs?

I think Mosaic is one of the most welcoming communities I have ever been a part of. Honestly, when my wife and I moved to Boston we had no friends or any prior connections. My first month here was miserable. I missed my family dearly and I disliked the city layout (small city
syndrome) even though I’ve lived near the windy city my whole life. Finding the ad to Mosaic on the T was tentative at best, but as soon as we walked through the door we were welcomed with open arms. Provided with friendship connections and constantly asked for updates on life. Now, I can’t imagine life without these wonderful people.Everyone and I mean EVERYONE would make a great addition to the program. So many people have so much love to give and have such powerful personalities I believe it would be a glorious site to see more partnerships with BBBSMB to help end the wait.

If you could give advice to a new Big Brother in the program, what would it be?

Don’t be afraid to be open with your likes! Honestly, I think that we’ve bonded over so many things that he didn’t know we would. I’ve brought him into my world and I like to listen to his exploits at school. Don’t be afraid to get in touch with that inner kid we all have in us. Remember it’s all for fun.