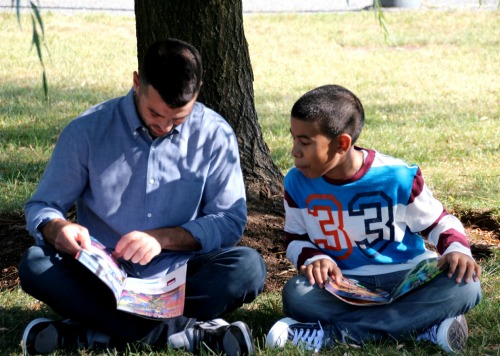 As an entrepreneur looking to become involved in a meaningful volunteer experience, Big Brother Jeremy heard about BBBSMB through a friend. Despite some initial reservations, Jeremy has now been matched with his Little Brother Jeury for 1 year and 4 months and says it was the best decision he’s ever made. Jeremy and Jeury answer some of our questions about their experiences being matched and how it was like to be in the Add a Little Campaign below.

Watch Jeremy and Jeury in the Add A Little Campaign video:

I found out about it through a guy I played intramural basketball with, he has been one for a number of years, and basically he thought “You’d be good at this. Why don’t you look into it and let me know what you think?” At one point I volunteered at a nursing home and it was fun, but it wasn’t totally fulfilling. So I figured this would be something I would get a lot of enjoyment out of, I really like kids and it just seemed like a no brainer. My thought was if anyone has time to it, it’s me so why not?

Were you nervous about Adding A Little to your life?

I definitely was. I was nervous about 2 things; I was worried having never done it, I didn’t know whether or not I’d be good at it, and if I was worried my Little wouldn’t like spending time with me. I was a little bit nervous I wouldn’t be creative enough to think of fun things to do all the time. But obviously that has not been the case at all!

How were your hesitation alleviated?

For me it took just one time of hanging out and we became friends, and then every time we hung out after that we had more shared history, inside jokes, and things to talk about. It actually became a friendship; it just felt really natural. And then we would talk every time we met. I’d be like “what do you want to do next”, and we would brainstorm fun things to do and it wasn’t all on me to come with ideas. He helped and told me things he was interested in. So we shared the responsibility of thinking of what to do.

Probably, it sounds funny but, just hanging out. So we often have a fun event that we have planned – whether its to go to the circus or go hit golf balls – but the most fun we have is on our way there driving in the car listening to music, blaring ‘eye of the tiger’, and dance…it’s hilarious.

What do you hope your Little will learn from you?

My message would be: just take a shot at it. It’s really not that big of commitment. It’s a couple hours every couple of weeks. Why not? Why not try? You might end up having a blast. The risk is so low and the output is so high. You could end up having a friend for your whole life and really making a huge difference. And if it doesn’t work then that’s ok too.

Just hang out with him, because he is like the best person to hang around with.

What is your favorite memory you have with your Big?

The time we went to Castle Island. We jogged around the giant castle, and we were playing football and the football almost fell over into the water!

What has your Big Brother taught you? Has he shown you how to do something new or different?

He taught me how to play his DJ set. First, he taught me to wait for the perfect moment to start shaking the disk. It was different and so fun.

I have been doing a little better in school, and I’ve had some new experiences that I wouldn’t have been able to do before.

A lot of fun! My favorite part was everything about it.

Yeah, because if you have a Big Brother he could do everything with you, and in case you’re lonely like you have no siblings, you can get a big brother and spend time with him.