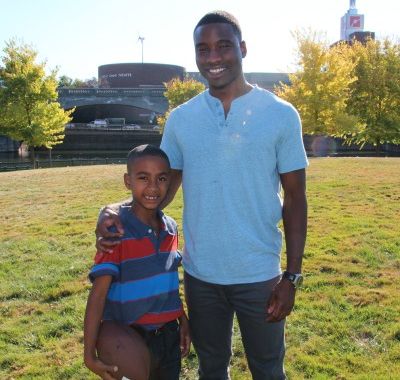 Nigel, who remembers how important role models were to him as a kid, hoped to make an impact of his own by becoming a Big Brother. After a year long match with Little Brother Stevon, both their lives have changed for the better. Whether it’s a trip to the Aquarium or a game of catch in the park, Nigel and Stevon always look forward to their outings together. Read more about their story, and their involvement in the Add a Little Campaign below.

Watch Nigel and Stevon in the Add A Little Campaign video:

I’m blessed to be where I am and to live the life I live – I didn’t get here on my own; there were many people along the way who reached out and gave up their time and energy to help me and I’m so thankful for that. I also remember how much I used to look up to my older cousins when I was younger; I was hoping to be that same kind of influence in someone else’s life.

Were you nervous about Adding A Little to your life? How were your hesitations alleviated?

I was worried that I wouldn’t have time and that I wouldn’t be able to handle the responsibility. My hesitation was alleviated after I met my little brother, Stevon and we had our first outing. Stevon makes it incredibly easy to be close with. I always look forward to our hang outs; he’s become one of my good friends. It’s not a burden, but a joy.

What is your favorite thing to do together? How do you Add a Little excitement to your day together?

We’re both big sports fans so when the weather’s nice we’ll be outside. We’ve played soccer, football, and basketball so far; we’re both pretty competitive so we can play for hours (as you can see from the Add A Little video). I try to take advantage of the different outings that are offered to us too – on any given day we could be at the Aquarium, the Museum of Science, a Celtics game… anything which Big Brothers Big Sisters of Mass Bay helps provide discounts and deals for. The fact that we both get exposed to so many different opportunities adds excitement to both of our days!

Going to the Celtics v. Kings game – we both had a great time and we were in a great section of the crowd. Stevon ended up getting one of the free t-shirts that they toss up into the crowd (he didn’t catch it but the folks in front of us were kind enough to turn around and give it to him due to their height advantage).

I hope that Stevon has learned, and will continue to learn from me. I hope he remembers that he can, and should, continue to ask questions!

I’m more responsible – there are very few things that will cause me to miss our outings because I understand how much they mean to him. I make sure to plan ahead and I’m frequently looking for things for us to do together. Being a Big new to Boston has also exposed me to many different activities and I’ve gotten to travel all over the city with Stevon. It’s been a great learning experience for both of us.

I think we’ve developed a great sense of trust over the year. I don’t think there’s ever a dull moment.

Talk to anybody who is involved with the program, and ask them about their experience. It’s not a light task, but it’s absolutely worth it. I think the program benefits both Bigs and Littles alike.

Active; both mentally and physically active.

Currently, there are 800 boys waiting for a Big Brother. The Add a Little Campaign aims to show guys that Adding a Little can make a big impact and hopefully encourage more men to volunteer. How did you both like being a part of the campaign?

It was fun and completely different than anything we’ve done before.  If it’ll get more men to sign up I’m happy to do it. This is a great program!

Play sports – like soccer and basketball. I’m better, I always win the games.

I would say he has taught me how to participate, so I can learn.

What was it like being a part of the Add a Little filming and photo shoot? What was your favorite part of the day?

I liked when Nigel threw the ball and I had to catch it!