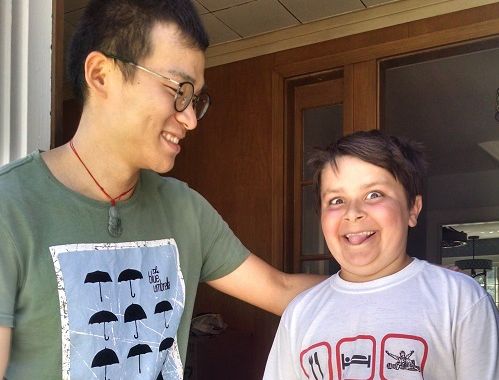 1.  What does it mean to you to be a member of the LBGTQ+ community and a member of a Big Brothers Big Sisters match?
All these years I’ve never felt any special about being gay; I’m just like millions of any other people living in this city working hard for where they want to be, who they want to be. I really appreciate Boston as home; it gives me such a great environment that I don’t feel different from anyone else for being a member of the LGBTQ+ community. On the other hand, becoming a Big has always been what I want to do, it’s where I want to be. Lucky for me, these two great things are happening to me together. I’m proud to be a Big, I’m proud to be Gay, and I’m proud to be Me.

2.   What impact do you feel that you have had as a big/ little/ parent/guardian in this match?
My Little’s parents want me to help him to be more open to try new things, which is something I’m working on myself too. I can see why trying new things together makes it more comfortable for my Little. Also, it seems like he’s getting a bit more comfortable with expressing his emotions and feelings to people he cares about now. But, that’s still something that I wish to see more a visible impact on, though.

3.   What has been your favorite outing so far?
He’s never gone ice skating before so we were planning on ice skating in this March to get him to try something new. 9 after I came back from my China trip, but the rink was unexpectedly closed that weekend. It was fun that both of us thought about Roller skating right away and went for it. It was his second time doing roller skating and he was bad(not an athletic kid) and that frustrated him. After spending most of the afternoon sitting on the bench he promised me that he’ll try 3 rounds before we go. But surprisingly he went on and on after 3 rounds despise of keeping falling. That’s the first time I’ve seen this side of him, and I told him how proud I am of him, he was really happy to hear it. The best part is weeks later, when we were thinking about next outing, he’s like, “Do you want to try roller skating again?”, this time he spent most of the time skating without holding the handles instead of sitting on the bench.

4. Do you feel that being a member of the LGBTQ+ community has impacted the match that you are a member of?
When we hangout, we talk about my Little brother, his parents, and my husband. We joke around about our relationships with them and we express our love for them. I hope in the future he would never feel uncomfortable or shameful for talking about whoever he loves or whatever kind of relationship he’s in, because I don’t feel that way when I am talking about my husband with him. Being a Big allows me to watch both my Little and our relationship grow; it takes time, but it’s worth it. Also, observing of how my Little interacts with his parents gives me ideas on how to be a good parent myself some day.

6.  What made you want to become a Big?
I love kids; I used to work as a volunteer teacher in China. When I was going through hardships growing up, I actually got most of my support from my younger cousins. Now that they’ve grown up they themselves can see my influences on them (hopefully it’s all good influence). Children are the future; I’m hoping to contribute to make an even better future world by bringing positive influence to my Little, and most importantly, give him support like what I got from my cousins.

7.  Who were your mentors growing up? How did they impact you?
I grew up living with different people so there was never a set mentor for me. Where I’m from, most people don’t go to school due to lack of education resources and negligence of parents. If I have to list someone as my mentor, it would be my cousin. As a girl from my village, she had a really inspiring story of becoming the first person who got into college and got a higher education without any support from her family. During our limited interactions through my college, she always inspired me to be who I want to be and to go for a bigger world. Even today, she still messages me from China every now and then to remind me to always go for what I love and what I love to do.