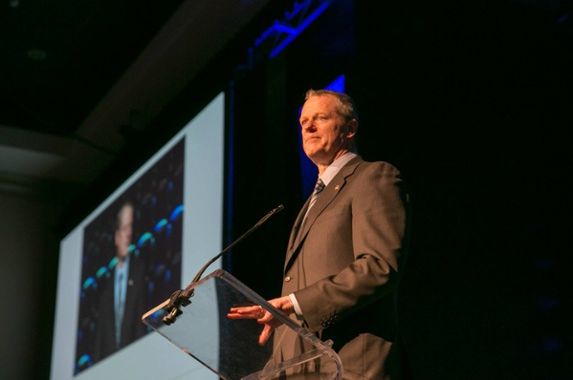 Charlie Baker, the Governor of the Commonwealth of Massachusetts, speaks from experience. Accepting the 2015 “Excellence in Mentoring” Award at the Big Brothers Big Sisters of Massachusetts Bay annual “Big of the Year” gala on Thursday, May 14, Baker delightfully recalls the impact mentoring has had on his life, highlighting the many rewards of the program that he’s shared with his now not so Little Brother John.Get inspired by either watching or reading his speech below.

“First of all, I just want to say how honored I am to be recognized with this award and to be in such terrific company. You know, my little brother is fifty one years old. I met him 40 years ago and he had what I would describe as a tumultuous childhood.

I had a unique opportunity to get a look into a life that I probably wouldn’t have had much sense for if I hadn’t spent so much time with John and his family.

By the way, this is how long ago this was: I heard an ad on the radio when I was doing my homework and I wrote it down on my desk calendar—I had a desk calendar! And so I stared at the phone number for a few days before I called, and I ended up connected to John.

But we did spend a tremendous amount of time together over the course of the next 25 or 30 years and Joe pointed out that my wife Lauren and I had to sort of sign off on dates and friends of his, but what Lauren also pointed out to me was that she had to pass the general test of his before I had his permission to marry her.

Let me just say a couple of very quick things about Big Brothers Big Sisters of Massachusetts Bay. I had the chance first-hand to see why this program works. It’s pretty simple. For the kids who are involved in the program, if it works the way it’s supposed to, they develop a very special bond with somebody they could talk to, seek advice and guidance from, but most importantly of all, becomes their biggest fan.

If I had to pick the single biggest thing I think Big Brothers Big Sisters does for kids, is that it gives them a sense there’s somebody out there, who is not a blood relative, who is totally invested in them, who will be there for them, who will root for them, and who will help them succeed.

It is tremendously powerful. You hear people talk all the time about the coach, the teacher, the instructor, the neighbor, the uncle, the grandmother, who is that person who sort of picked them up when they were down and was there to celebrate with them every little and big success that they had in their life. For young people, especially those like John and others, they don’t get to play the same kind of hand that a lot of other people do. This is a game-changer.

I can say from my own personal experience, and from talking to other people I know who have been Bigs, that the power, the benefit, and the joy that comes from that relationship is something, no matter how you go into it and what your expectation are, wildly exceeds them in ways you never could have predicted or understood.

So I was on the Cape and I managed to squeeze in 30 minutes with him—which 30 minute these days is a long time—and I had a chance to catch up with him on a bunch of things and we, this is so cool, we traded phone photos of our children, which when you think about how long I have known this guy it sort of makes sense, but I still look at him and I see the same 11-year-old boy that I saw when I met him. Although I’m quite sure when he sees me he sees that old broken 58-year-old guy that I am today.

But, his oldest son just finished his freshman year and is majoring in something that I can’t even pronounce. His son really is a rocket scientist. His daughter is about to finish junior year of high school. The success that John has had, success I think every boy and every girl who goes through this program has, and I’m saying this to the ones who are here tonight, it’s yours. You earned it. Every single bit of it.

The fact they had somebody there to help them over the tough spots, and somebody who gave them, really when they needed it most, that shoulder to lean on, believe me, for them it was much better than it was for you.