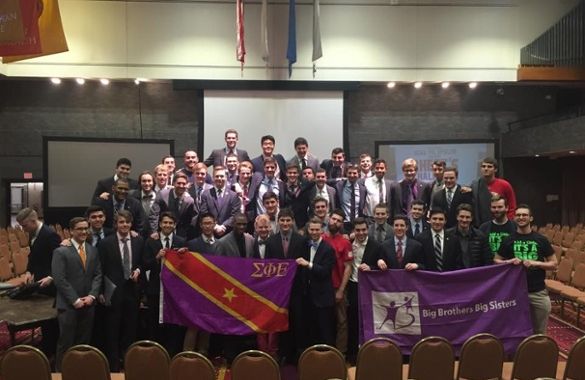 Gorging for a Good Cause: 3 Innovative Approaches to Partnerships from Boston University’s SigEp

A triple bacon cheese burger, a heaping plate of fries, an eight scoop super sundae (with a brownie at the bottom) and a 20 ounce root beer. How could anyone be talked into trying to eat all of that in a day let alone in 30 minutes? Who would pay to try to accomplish such a feet? And who would pay for the privilege to watch the spectacle of others trying to do it? Well, our amazing friends at  Boston University’s Sigma Phi Epsilon (SigEp) signed up 24 contestants from organizations across campus and packed a ball room with 300 people to cheer them on for the Rhett’s Challenge which raised $2,700 for Big Brothers Big Sisters of Massachusetts Bay.

The men of SigEp have committed themselves to being ardent supporters of BBBSMB and we count them as a partner that we are very lucky to have. If you’re going to take notes from anyone on how to best support a cause you love, take a page from SigEp’sbook. They are changing the game and constantly thinking of new and creative ways to support organizations they love.

Whenever SigEp has the opportunity to fundraise for Big Brothers Big Sisters they take it and run with it. Last year they got comedian Paul Scally to fly from Las Vegas for one show only and raised $1,600 for the agency. But Rhett’s Challenge was a unique and exciting way to raise money and promote BBBSMB’s mission on BU’s campus.

“The Sigma Phi Epsilon Chapter at Boston University was very excited to collaborate with Big Brothers Big Sisters of Massachusetts Bay on the Rhett’s Challenge EatingCompetition. Our brothers truly enjoy the experience of working alongside BBBSMB because we are able to become involved in so many ways. Our brothers are always eager to help and assist wherever possible.” SigEp’s President Kevin Doherty.

As someone who was there, I can attest that the event was an amazing sight (check out pictures here). Especially since the winner finished all that food in 10 minutes and 15 seconds!

As a strong partner of BBBSMB, BU SigEp men have a long history of being Big Brothers. This semester Cameron Curtiss, Chad Stakutis, Ryan Servais and Bryan Chambers are mentoring their Little Brothers at Boston elementary schools. To their Littles, they are the coolest guys they know. And how could they not be? After all they are college guys  who get to eat pizza and play video games whenever they want.

Bryan Chambers sums up the experience well, “Being a Big is an incredibly rewarding experience for both Bigs and Littles, and we have a lot of fun in the process. I am very excited about the rest of my time with Big Brothers Big Sisters of Massachusetts Bay and hope SigEp can continue to encourage more people to get involved!” – Big Brother Bryan and his Little Brother Hamilton

To really put the icing on the cake–or maybe a 9th scoop on that sundae they already demolished– BU SigEp shows up with numbers when we need them. Big Brothers Big Sisters of Mass Bay’s awesome fundraising and match events require skilled volunteers to sell raffle tickets, run games, check coats, and provide a great overall experience to our guests. Knowing that not all of their guys can become Bigs for one reason or another, SigEp has gotten involved as event volunteers. This past December, six SigEp men volunteered on a Saturday morning the night after their big annual formal. It was amazing to see half a dozen college guys that bright eyed and ready to chip in that early in the morning especially after a major party and during finals week!

So why do they do it? Chapter President Kevin Doherty has an idea: “This partnership has captivated many of our members because of how effective the programs are in helping children in Greater Boston. It has been such an honor to work with Big Brothers Big Sisters of Mass Bay and SigEp looks forward to the future of our partnership together.”