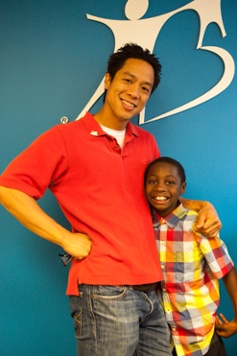 Most Bigs and Littles we talk about in the Big Brothers Big Sisters of Massachusetts Bay program have been together for years. And although these relationships are incredibly inspiring, we understand that a lot of our Matches aren’t necessarily at that point in their friendships! In an attempt to get a different perspective, we reached out to Big Brother Roger for an interview on his relationship with his Little Brother Sean and of course, their involvement with the Chicks Dig Bigs Campaign.

Tell me about your involvement with the “Chicks Dig Bigs” campaign.

I was curious to see if chicks really do dig bigs! I also thought it would be fun for us to both be in a video. I was an extra in Hawaii 5-0 so I figured I’d bring back some of those experiences and help out a non-profit I care about!

What have you learned from your Little?
He has shown me how he takes life as it comes to him no matter what the issue is in the family school friends. He is a “yes man” and loves all types of people and activities.

I have also learned to have responsibility over another person. To be a role model. To try not to swear, and think and act positively. It is good practice for being a good dad.

He has learned to love math! I think one of the most important things was being able to share experiences with him that he’s never done before, like sailing, snowboarding and going to a Celtics game (amongst other sporting events around Boston) Most kids just don’t have this experience. How has your relationship changed since you first met?

We love playing or watching sports together. We also like to do something new or learn a life skill.