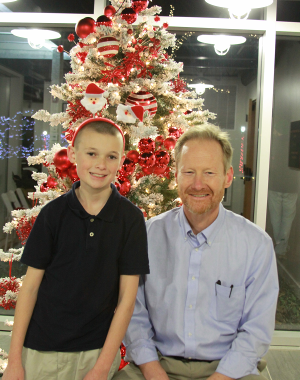 Meet Mike Barry; a resident of Centerville, Massachusetts who was announced as this year’s Massachusetts’s Big Brother of the Year! Read his amazing story with his Little Brother Kenny, and his mom Lisa.

Mike always knew he wanted to give back to his community in a meaningful way. He always had a passion for helping kids, and thought that becoming a Big Brother would be the perfect way to give back.

In 2010, Mike was matched with his Little Brother Kenny. Kenny’s mother Lisa recalls the weekend when they first met. Understandably, Kenny was a bit hesitant at first about letting a stranger into his life. After Mike’s first visit though, it was a complete reversal.

“The following Saturdays or Sundays every time Mike pulled into our driveway Kenny practically ran out to get in his car,” said mom, Lisa.

“During our outings I look for ways to encourage Kenny to keep an open mind, put more emphasis on facts as opposed to opinion, and to think about decisions he makes critically,” said Mike. “Although persistence, organization, punctuality, and the ability to work together are important characteristics, I also like to tell Kenny that life is much like a big school, with many lessons to be learned, and that making mistakes is just a part of life.”

Lisa is so appreciative of Mike for being a positive male role model to Kenny. “Mike always goes above and beyond any expectations Kenny or I had. Without Mike, Kenny would not have been able to have some of the experiences he has had. Mike has been the solid foundation that Kenny really needs and I am very grateful as a parent that he is with us.”

Lisa isn’t the only one who is grateful for Mike being around. “Mike has become the only male bonding I get in my life,” said Kenny. “He is always willing to spend time with me and never gets frustrated or angry or even impatient. I think I wear him out! And he still keeps coming!”

Another advocate for Mike is his Match Support Specialist Michelle Vagnini. “Mike’s passion and commitment to the mission and vision of Big Brothers Big Sisters of Cape Cod & the Islands is amazing. In my opinion there is no one more deserving than him to be awarded 2014’s Big of the Year” she added.

Although Mike is flattered to represent Massachusetts in the National Big of the Year competition, the greatest reward for Mike, is the life long relationship he has established with Kenny.

“Mike is not just a Big Brother to me, he is also my best friend. I can’t wait to spend many more years together,” said Little Brother Kenny.

“Someone once said that love means caring about something other than oneself.” added Mike. “What could be more important than helping a young person grow up to be resilient, healthy, and productive member of the future? I look back on the time I have spent with Kenny, and I marvel at his progress. I have so much hope and optimism for his future.”

Mike was selected by a panel of judges across the state based on his dedication and service to his Little and local Big Brothers Big Sisters of Cape Cod and the Islands agency. Criteria for selection also includes helping their Littles’ set goals for their future, show increased confidence and improve relationships with family and peers.

Big Brothers Big Sisters of Massachusetts Bay is currently in need of positive male role models and has over 800 kids on the waiting list. End the wait and become a Big Brother today.