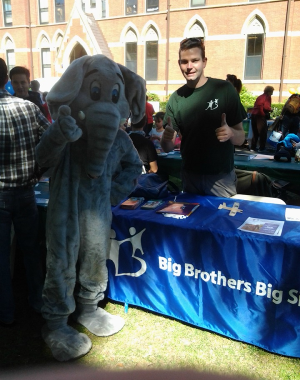 Thomas Bentley is the Community Engagement Coordinator at Big Brother Big Sisters of Massachusetts Bay. Here he shares his thoughts on the impact of mentoring relationships and how the small things can have a lasting effect on a child.

I found myself confidently exclaiming “Mentoring isn’t a crutch, it’s a catapult” during a presentation to a room of 29 Gordon College students.  A year has passed since I coined this phrase and while I have used it only a few more times, I have thought a lot about its meaning.

I was trying to address a concern that many people have whenconsidering getting involved as a Big Brother or Big Sister mentor.  In this particular case, a student asked about what happens after they graduate in a couple of years.  A lot of folks know that they can be a Big for at least a year, but they get concerned that they can’t make a longer commitment. What I like to tell them is that the facts tell us that they can make a lifelong impact to a child in 12 months. And the great news is that the benefits of having had a Big don’t ever go away.

Often I’ll remind an audience that it is very unlikely they still see those influential adults of their childhood. Those teachers, coaches, parents of friends, who gave them extra one to one attention, every week for lunch or every other weekend, aren’t necessarily still around. And thats ok! Regardless of where their relationship remains in the present, the mentees admit that they are who they are today because for that moment in time, they shared something special with someone who cared for them.

My personal example is Mr. Johnson.  Mr. Johnson was a neighbor of ours when my family moved from warm and welcoming Houston, Texas to the cold and confusing world of Worcester, Massachusetts.  While I had supportive adults in my home, it was Mr. Johnson who taught me how to ride a bike, play chess, and do math problems in my head.  You know what they say about riding a bike?  Yeah, I still know how to do it.  And chess is game that helped me bond with one of my best friends.

Now I haven’t seen Mr. Johnson in 20 years or so, but guess what?  Those things I learned didn’t disappear.  The fact is, you can help broaden a child’s horizons and improve their outcomes for life when you mentor them through a professionally supported, one to one friendship.  And you don’t have to be there forever.

Research shows that kids who have had a Big, self-advocate better.  They get more from adults.  They make their own friends, and choose positive and caring friends over the bad ones.

The point of a positive, strength based, mentoring relationship is not to develop dependency among kids on their mentor.  All the kids waiting to be matched in our program have families, teachers and others who care for them.  What they do need is a friend who can spend time with them one on one and give them the positive attention that all kids thrive under.

So don’t worry about ‘being there forever’. Life happens. Focus instead on making your time together meaningful. After all, mentoring isn’t a crutch, it’s a catapult.