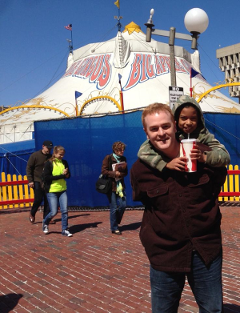 After realizing that something was missing in his life, Big Brother Jonathan decided he wanted to give back in the most meaningful way he could think of. What seemed most natural for him was mentoring a child in need of a male role model. 3 years later, Jonathan and his Little Brother Joshua have developed a true friendship. Read his take on the experience, his advice for new Bigs and some fun memories they’ve shared together.

There was something missing in my life. I was a manager and a trainer in my job, and as such I was a professional mentor. But I knew I had something else to give. I also realized that I’d had a lot of privileges in my life, one of which was to be brought up surrounded by positive influences. Instead of feeling badly that not everyone has that growing up, I decided to do something about it and share my own positive influence.

What have you learned from your Little?

A lot of funny catch phrases. Joshua is kind of a throwback in that he uses “psych” a lot—I’ll ask him if he had fun after hanging out and he’ll say, “No—psych! I did!” (He also taught me “super-duper sorry” when he spilled ice cream down the back seat of my car once. That was funny.)

He also taught me that a connection—and affirmations of that connection—don’t always come explicitly, that is, in words. Laughing and having fun together is just as much a validation of a relationship as saying “Thank you” or “I have fun when we’re together.” Joshua is a really sharp kid. He’s observant, and he’s also shy— which means he’s a man of few words. I’m quite the opposite. So he’s taught me a lot about brevity and conciseness. You don’t have to talk a moment away in order to just enjoy being in each other’s company.

What are your favorite things to do together?

Joshua loves sports, especially basketball and football, so we do a lot of that. He’s getting better at basketball; my natural ups aren’t going to be much of an advantage pretty soon. He schools me in football because his instincts of when to change direction are so good. We’ve been to the Children’s Museum twice, and we’ll probably go a third time soon because we haven’t explored all of it yet.

It hasn’t changed dramatically yet. It didn’t take long for us to get comfortable with each other, which was pretty cool (and a relief). As he gets older, I’ll expect we’ll talk about more complicated things, but right now it’s pretty stable. I love how we can pick up right where we left off—especially since I moved an hour away a few months ago. I can still find time to see him despite the distance and my weird schedule.

We met when he was 7, so he was really young. He couldn’t tell time and didn’t know any math facts. Now he’s 10, so he quizzes me about those math facts. He’s getting sharper with his language every time I see him, so it’s been really fun to watch him evolve.

As for what he’s learned from me, well… I hope he’s learned that it’s possible to have positive male role models in his life. I also hope that he’s learned to believe in himself. I sat with him one evening and went through some tough homework for him, and I hope he can turn that moment (and hopefully more like it!) into patience with himself.

If you could give advice to a new Big Brother in the program, what would it be?

Trust the Match Support staff to match you with a great little, and to support you in the beginning stages! They’re great at what they do and gave me so much confidence when Joshua and I were first starting out.

Also, don’t try too hard when it comes to thinking of outings. Remember that they don’t have to be elaborate or super flashy; they just have to be a chance for you and your Little to spend time together and talk.