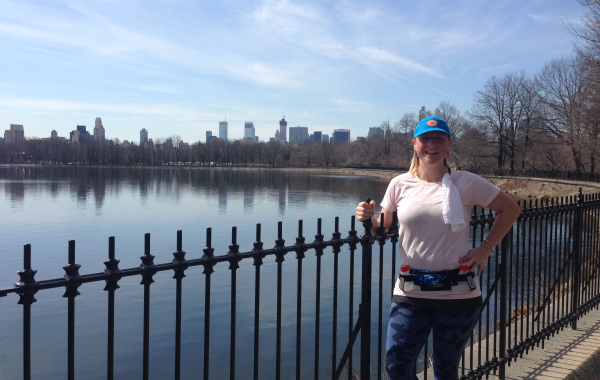 Thanks to the John Hancock 2014 Non-Profit Marathon Program, Big Brothers Big Sisters of Massachusetts Bay was presented with an amazing opportunity to participate in the B.A.A. Boston Marathon® on April 21, 2014. We also have two amazing and resilient runners to help fuel our need for Big Brothers across the Massachusetts Bay Community. Meet one of our runners, Amanda Heller!

Hometown:
Wellesley MA by way of Johannesburg, South Africa (where I was born)

If you could have any actor play you in a movie, who would it be?
Probably Helen Hunt, I’ve been told I look like her and was mistaken for her once.

Longest run or previous marathons completed: I completed the Boston Marathon in 2004, but my body hardly remembers that now…  every run feels like the first run!  I have stuck to my 16 week training program, my longest training run was my 20 miler that I completed last week on the marathon course.

Favorite song to listen to while running:  Early in training I listened to Pop Music I have in my iTunes library but that got old very quickly.  There are only so many times you can listen to those songs over and over.  For my first 6 miler I downloaded my first book, The Lone Survivor and I was hooked.  During marathon training I have listened to 6 books, it has been fantastic and especially during really suspenseful parts, you almost forget that you are running.

What inspired you to run the 2014 Boston Marathon for BBBSMB?
I have to say that it was my husband Ben’s involvement with the organization.  As a Big Brother several years ago and now on the board of overseers I get to see all of the wonderful work that this organization does and the impact it has on the young lives of its participants.

Do you have a positive mentor in your life? How has mentoring had an impact on you?
I have some really great mentors in my life, of course my parents play the most impactful role in helping to guide and steer me in life.  Outside of family, I have great mentors in my business career and in friends I have met along along the way.

How will you celebrate finishing the marathon?
I plan to celebrate with my family, this has been a journey for us all.  Even though I have been the one running everyone in my family had to sacrifice for me to be able to complete this goal.  My husband has helped to take on more than his fair share with the kids.  My kids have missed me on the weeknights and weekends during the long training runs.  They all have come to drive me out to points on the marathon course so that I could run home.  I will celebrate all day with the supporters along the way, either running with me, cheering me on the course or following me on line.  I will celebrate with everyone that has donated to BBBS knowing that we have all made a difference in the life of a child.