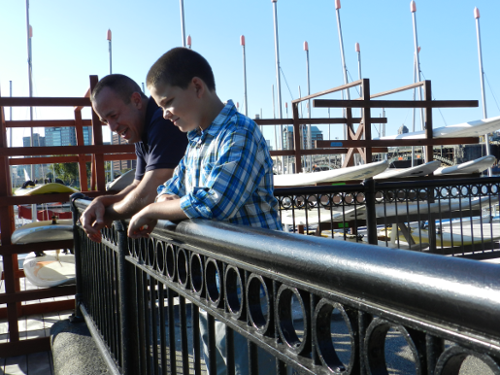 Having recently moved to the Cape and recognizing the growing need for Big Brothers (roughly 80 boys waiting), Dave was compelled to get involved. Though he and his Little Brother Tyler have only been a match for about 6 months, they have both felt the impact of the new friendship in their lives. Dave and Tyler were excited to be involved with the Add a Little Campaign and to share their story with us. Check out what they had to say.

I previously lived in Pennsylvania where I was on the Advisory Board for Big Brothers Big Sisters. From my experience on the board, I was well aware of the need for Bigs so after I settled on the Cape, I began the process right away!

Were you nervous about Adding a Little to your life?

I wasn’t nervous at all. Anytime you have the opportunity to make a difference in someone’s life, especially a child’s, there should be no anxiety or hesitation at all.

I love and treat Tyler as if he were my own little brother. There’s no doubt in my mind that our bond will continue long past our Big Brothers commitment ends. He really have bonded in just the short amount of time we’ve been matched together!

Given we’ve only been matched since March of this year, I’d have to say my favorite memory was the day we met and both agreed to become a match. It was a really special moment for me and obviously the start of a great friendship that I had been looking forward to for a while.

What has Tyler learned from you?

The importance of giving to others. I had told Tyler about times when my friends and I would dine out in large cities. We always got our leftovers to go and gave them to homeless people on our way back to our hotel. Even a small gesture like that can make a difference. When Tyler and I went to Boston on an outing, we had lunch. I noticed he barely touched his meal and asked me if he could get it to go. I smiled and said of course. When we left the restaurant, he politely offered his meal to a homeless man who was incredibly appreciative.  The smile on Tyler’s face said it all. I was so proud of him and it was amazing to see that he had remembered that story of my small gesture and wanted to be apart of it too. We decided that one of our future outings will be volunteering at a soup kitchen.

It’s made a huge difference in my life. Back in Pennsylvania, my neighbor was a single mom with a young boy. I was in this boy’s life almost daily from day one until I moved away. When I arrived here, there was a huge void in my life. Tyler has more than filled that void. I look forward to our outings, regardless of if it’s a game at Fenway or a movie and wings. It’s not important what we do; what matters is the quality time we spend together. Tyler is the most respectful and polite twelve year old I’ve ever met. I love spending time with him.

I think what keeps many potential Bigs from joining is that they feel they don’t have the time to commit to a little. It’s only 2-3 outings a month with each outing being only a few hours. It’s a simple program with a ton of flexibility. You do things that you both like to do and it’s just fun. If only they’d pick up the phone and start the process, they’d be rewarded immensely.

Currently, there are 800 boys waiting for a Big Brother. The Add a Little Campaign is aimed at showing guys that Adding a Little can make a big impact and hopefully encourage more men to volunteer. How did you both like being apart of the campaign?

Being asked to represent the Cape in the Add a Little Campaign was an honor for me and especially for Tyler. I believe we were asked because we’re a great match and because of our natural ability to get along. If our participation in this campaign results in one match, it’ll definitely be worth me getting drenched by Tyler in that kayak. It was a long soggy ride home!

What is your favorite memory you have with your Big?

The first time we went bowling, and I won!

He has taught me to keep a level head.

Yes, I strongly recommend it!