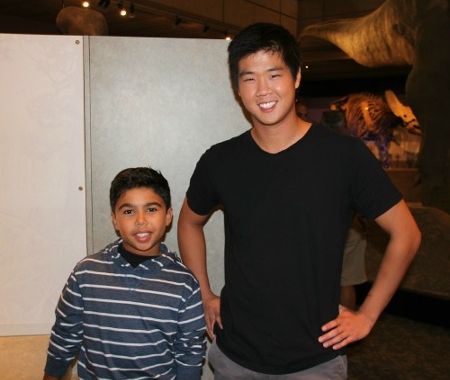 After being matched for 7 months, Big Brother Mike and Little Brother Kenny are more like friends than anything else. They have gotten into a comfortable ‘groove’, and spending time together is like hanging with an old pal. They have answered some of our questions, talked about their experience with the Add a Little Campaign, and Mike wants to know ‘What’s really stopping you’ from Adding a Little?

Watch Mike and Kenny in the Add A Little Campaign video:

I wanted to volunteer some of my time and give back to the community. I really enjoy spending time with kids, and I thought BBBSMB would be a great opportunity to really see a direct impact.

What is your favorite thing to do together?

We love to go to the movies! The seats at Assembly Row are super comfy…haha. We “add a little” excitement by getting froyo after! Sky Zone and surfing don’t hurt either.

I feel like a real Big Brother. Our relationship is maybe more casual than most; I always think that if it wasn’t for BBBSMB bringing us together, we’d still be friends regardless. He’s so great.

My favorite memory is when we recently went to a Celtics game together. He was wearing an old Walker jersey and I was wearing a Rondo jersey. Kenny would scream his lungs out when OKC was taking foul shots which I found hilarious.

If you could describe your Little in one word, what would it be?

Our time together has been a really awesome experience. He has made me feel like I’m making a difference. I also feel like we’re going to be buddies for a long time, so I look forward to seeing where the friendship goes over the next couple of years.

We’ve just developed a groove where we say what we’re feeling and do what sounds fun. It’s not obligatory. It’s voluntary. It’s something I really genuinely look forward to.

Every person needs to make that decision for themselves. I found myself sitting on my couch doing nothing, and wanting to do more for the community. If you have that feeling, then what’s really stopping you?

Currently, there are 800 boys waiting for a Big Brother. The Add a Little Campaign aims to show guys that Adding a Little can make a big impact on the life of a child and hopefully encourage more guys to volunteer. How did you both like being a part of the campaign?

It was an amazing experience. Neither of us have been to a photoshoot/video campaign and being part of it was surreal!

Surfing, watch movies, doing the photoshoot – it was really fun!

Have you learned anything from your Big?

He taught me how to play tennis – I’m pretty good.

Yeah, I really got to talk to him a lot and I trust him. It helps me be able to talk to other people a lot more, and talk to them about stuff that’s going on.

Yeah, I would. It makes everything fun. The things I would do with Mike are things I wouldn’t want to do by myself like go to the Museum of Science. He makes it fun for me.