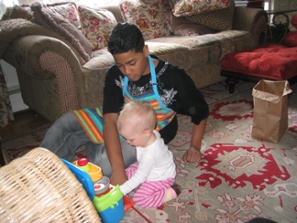 At Big Brothers Big Sisters of Massachusetts Bay we are aware of the influence that Big Brothers have on their Littles and the decisions they make. Many Littles have seen first hand how their Bigs have helped others, and are encouraged to help their communites and others around them. Former Little Brother Jeffrey shares his passion for helping his community, and how Big Brother Burt encouraged him to define his own social responsibility.

The most pressing issue in my community is violence. This problem is something I care about, because I don’t want anyone I know to pass away or get hurt because of the violence that goes on in my community.  If I could do something about the violence I would do everything I could, including not giving gun licenses to people who don’t need them and being more aware of what goes on around my neighborhood.  I would bring peace and make it so that families and children are always safe, regardless of where they live. I would want to change the negative influences on teenagers living in my neighborhood and replace them with positive role models like my Big, for future generations to come.

Why should people care about this? Because if it was your family wouldn’t you want the best for them? Wouldn’t you want them to not fear violence or fall into bad influences?  I hope that when I reach my goal of becoming a police officer, people will cooperate with me and help me change my neighborhood.  I want to become a police officer to have the ability to take the bad guys off the streets and bring some peace of mind to my neighbors.

My Big supports everything I do, if it’s a positive move.  He would tell me to keep going until you reach your goal and achieve what you want to accomplish.  He has helped define what my social responsibility is. I’ve talked to my Big about becoming a police officer, and he said “go for it, it’s something you would do well at and it’s a goal that would help you clean the streets to create peace”. Big Brothers Big Sisters has helped make the world a better place and I hope to do that as well.

When gangs, violence and bad influences are a part of my community, it’s hard to avoid it or block it out.  It’s the type of problem that you think about a lot and try to figure out plans to get out of it or try to stop it, but sometimes it’s just too hard.  If I was able to do something for teens I would build more recreational centers, and more places for teens to go to so they won’t run the streets and keep getting into trouble.  It bothers me to know that so many teens die because of the violence and problems that go on in my community and it happens for no reason.

Things in life are never easy, but you have to work with life to understand it and know how to deal with it.  When you think about how to deal with the problem you’re going through and you have it all figured out, that’s when you know what decisions to make.  Nothing is ever impossible to accomplish. You always have to try hard no matter what to reach to the top and achieve what you want to. I want to achieve these goals because I can make a better future for myself and others.