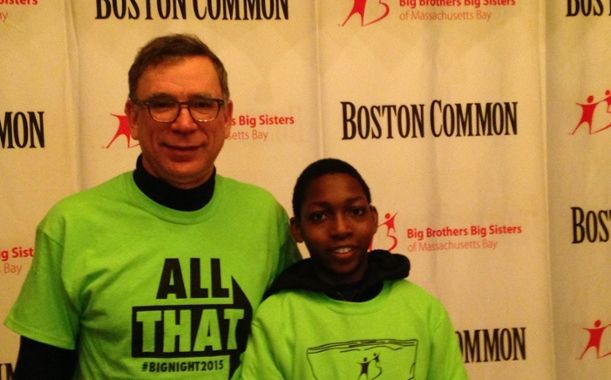 Sometimes mentoring is more than changing one child’s life. In fact, many volunteers go above and beyond their mentor duties, making an impact that reaches far and wide within the Boston community. This is exactly the case for Big Brother Scott Hamilton. When Scott was paired with his Little Brother Malik, his experience with Big Brothers Big Sisters inspired him not only to change his Little’s life, but to change the lives of other children by speaking at the Massachusetts State House in favor of Senate Bill 384, a bill working towards improving family life in Massachusetts. Read below to see how Scott’s experienes have postively influenced his life, ultimately making him one of the strongest youth-advocates our program has seen. Before joining Big Brothers Big Sisters of Massachusetts Bay, Boston local Scott Hamilton was heavily involved in youth outreach. Fifteen years ago, he started a basketball program for high school students to give more kids a chance to play a sport they love.  Alongside this, Scott also held the position of youth leader at his church in Cambridge. It was Scott’s commitment to youth that had him looking for more opportunities to get involved.

“Six years ago, I was at a phase in my life where I had recently separated, divorced a year and a half, when I came upon a Big Brothers information booth in Harvard Square during October Fest,” he says. “I knew that I wanted to continue to work with children, and that was right when I found the school based program.”

At the time, Scott’s Little Brother Malik was in third grade at King Open School, an elementary school that hosts one of our school based programs. Scott and Malik were paired through this program to meet regularly during Malik’s school day at lunchtime or recess.

“Starting the relationship in a school based program could not be a better way,” Hamilton says.  “There’s familiarity with the school, which makes it comfortable for Malik so he could feel more relaxed. The really cool thing about it was that I got to see him interact with friends, students and teachers, so it was easy for me to quickly see what challenges he had and where I could be helpful.”

Scott started to play a major role in Malik’s life, especially when it came to advocating for him in school.  When he noticed his Little struggling with certain subjects, he asked Malik’s mother if he could participate in Malik’s educational review.

“It was pretty clear to me that he was getting frustrated,” Scott said.  “After advocating for him in that meeting, they moved him into a separate classroom with kids who learned at a similar pace.  Since then, he has been doing awesome—he was so proud this past spring he showed me his report card with all As.”

Scott and Malik also share a similar passion for basketball. Along with hanging out on the court, Scott says he has “made it a point to broaden his perspectives” so they try other adventurous outings such as snowboarding, camping, and working on building projects together.

After nine months of meeting at school, Scott and Malik transitioned to the School Plus program, in which the match would meet both in and outside of school. When Malik eventually hit middle school, the match moved on to the community based program. There is no question Scott has played a major role in shaping Malik’s life, however, Scott makes it an important point to note how much Malik has shaped his life as well. Seeing Malik’s childhood experience without a father figure involved made Scott aware of a greater social issue—one he felt inevitably connected to and compelled to speak on.

“One of the things I learned is that there’s precious little compassion in our society for men and boys,” he says.  “One of the most devastating things in working with young kids were in situations of divorce, where parents were separating from their kids.  In looking at all kinds of social studies, you find that when a parent has less significant involvement in their child’s life, the child is prone to have much worse outcomes behaviorally, mentally, intellectually, emotionally, and so on.”

About 10 to 15 years ago, there was a referendum vote on a Massachusetts ballot to get legislature to promote the idea of shared parenting bill, Scott explained, that would essentially  provide and ensure an equal amount of time required for each parent to spend with their child in situations of divorce.

“The vote had 83% in agreement, yet there is still inaction within legislature to make those family changes that would enable a more typical situation,” he said.

Two or three years ago now, there was a group established by Governor Deval Patrick to rework family law for children. This committee consists of 18 individuals who represent a diverse cross-section of people interested in children’s welfare, Scott continued to explain. Out of that group came Senate Bill 384, which would set a goal of a minimum of 1/3 parenting time between each parent and their child.

“I felt compelled to go testify on that bill,” Scott said.  “When the judiciary held a hearing, I spoke about my experience with Malik and being a Big Brother, and bearing witness first hand to the challenges kids have when they are separated from a parent.”

Scott fully believes that children do best when they are able to learn and absorb from both parents.  “The influences we have on children are frequently complementary,” he says. “And the most natural and effective mentors are parents. We do a huge disservice to children if the state does anything to limit that access children have to their parents.”

Scott was a good addition to the group of individuals testifying because he brought a different perspective.  Most of the other testimonies that day were from men and women who had been shut out of their children’s lives. As a Big Brother, Scott brought more consistency to the argument they were all trying to make.

From here, Scott hopes to connect with his state senator Pat Jehlen, who was absent from the hearing, to readdress his concerns more directly. The Senator hasn’t taken a position on the bill yet, he says, “but I will be talking to her about it. The most important thing at this point in time is to get it out of the committee, onto the floor of the house and onto the floor of the senate—and then it will pass.”

Although Scott’s mentoring relationship influenced his advocacy for this bill, it has also deeply affected his personal life. Being a Big Brother has allowed him to get in touch with his younger side, allowing him to continue to participate in the sports and activities he loves such as basketball, frisbee, and riding bikes.

“And overall, it has helped me gain empathy in particular for boys growing up in Boston,” he says.  “It has built my awareness of the problems kids face growing up in single-parent households, and it has lead me to a greater appreciation for what I have, which is what truly lead me to be an advocate for this bill.”

Scott is an exceptional mentor who has grown through his experience with BBBS. How has the program affected you and your family? Share with us in the comments!