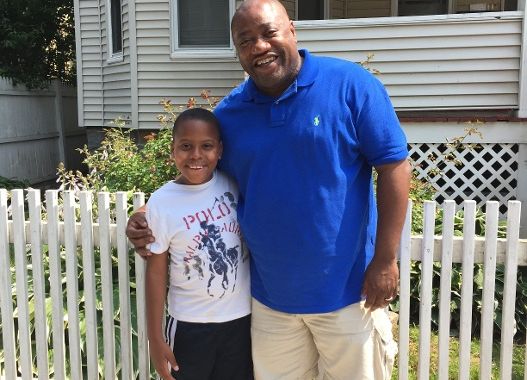 In honor of National Mentoring Month, BBBSMB would like to highlight some of our partners who play a major role as mentors in our community. This week, we will be focusing on Chris Byner of Boston Centers for Youth and Families. Chris is a lifelong Boston native, who gave up a six-figure job to pay it foward to his beloved community. Now, he’s a Big Brother and speaking on the importance of mentoring.

Chris is a lifelong Boston native, who gave up a six-figure job to pay it forward to his beloved community. His experience growing up with and helping the communities we serve greatly helps with giving BBBSMB insights on today’s youth and how we can keep improving to impact them further.

How do you see mentors play a part in a child’s healthy development, whether formally or informally?

So, we know what research tells us, that’s why all of you at BBBSMB do the work that you do daily. Research tells us that having a mentor increases youth’s ability to develop well. I know in my own life it was important that I had positive, healthy adults, and many of them did not sign on as Big Brothers, but played integral roles in my life and getting me to where I am today.

I always look at my own upbringing with being the second youngest of 15 and having a mother and father who really loved us. They worked really hard, they were home to take care of us all, but not too many of my peers could say the same thing.

From the mentorship side of things, we tend to ignore what our parents say, but when someone outside the home takes a liking and starts to impart wisdom, we listen. Like a coach, youth worker, a minister, people that are healthy and positive. You build these relationships and they have a lasting impact on you.

I know that whether it’s informal or formal, that mentors play a significant role, and really divide and support to help youth and young adults get on and stay on the right path. Whether informally or in a formal mentorship, as I just recently became a Big, I try to be a mentor with all of the young people I come in contact with. I always remind them that I can’t make them reach out to me, but I will try to impart on them that no matter what I am always there for them. If it’s nothing more than we get together and meet once a week or talk on the phone, if you need some wisdom it’s important to have a positive, healthy adult.

What is the impact of drugs and violence that you have seen on youth and families today?

I think drugs and violence are having a significant impact on families. Clearly, it’s not a new issue. Substance abuse has been around, violence has been around and there’s a whole lot of other social issues that families have to deal with on a daily basis.

However, it just seems like when you look at particularly police and law enforcement, and African American relationships, these issues are now very prominent nationally. I sit down and chat with the young people in the youth advisory committee often. They are kids just trying to do the right thing, and I want to see most of them are doing something positive. 90% of them are trying to do the right thing and are very bright and very smart.

However, these young people often times share their stories with me, particularly around police and how they get treated around the communities that they live in. They’re frustrated, they’re afraid, and not only for themselves. We try to instill hope where there is hopelessness and it’s really tough to do that when my young people, who are trying to do the right thing by going to school, getting involved in positive programs, feel like there is no hope.

I’ve cut my teeth over the years working for violence prevention. Nationally, Boston has certainly been a beacon for violence prevention and intervention, but clearly we still have challenges here in this city. We see the impacts daily in our work. A lot of the families who we work closely with, for all intents and purposes, are good people, but you’re dealing with a lot of issues whether its poverty or social and health inequities. Then later on, violence and substance abuse start to play a part and it’s a lot to have to deal with.

For the youth in those environments, we know how important it is to really wrap our arm around them and provide them the types of support they need. One of the things for us is if we could take all those kids home with us and keep them safe we would do that, but the reality is we can’t. What we can do is provide those families with the tools and resources that will enable them to provide the types of environments that will help our children to become successful adults.

Using people like me to be a part of that conversation and help recruit Bigs could be very beneficial. If I walk into a room and start networking with people and saying “hey I’m doing it, and it doesn’t require a lot of the things you think it requires”, that could make a big impact. A lot of people are afraid to think of this huge commitment. And I mean it is a big commitment, but it’s not a commitment that you can’t meet. They think it might take them away from their families, and other commitments, but the reality is you make it work for you, your Little and the families.

Having opportunities where you’re coming out and talking to some of the guys in the community, it has to be with somebody that they connect to and understand, and I think you can really get some guys involved that way. There are guys who want to become Big Brothers, they’re just a little bit afraid.