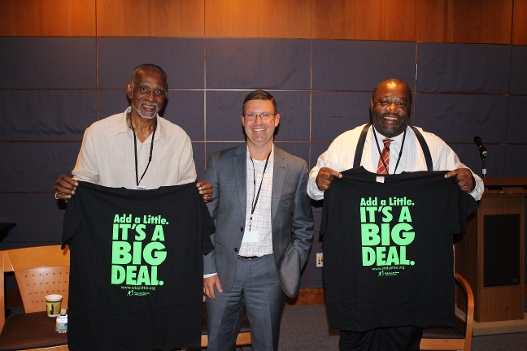 In honor of National Mentoring Month, BBBSMB is highlighting some of our partners who play a major role as advocates for mentoring in our community. This week, we will be focusing on Greg Davis of Boston Housing Authority.

Greg has been with Boston Housing Authority for 25 years as a Family Services Manager and is now the Special Assistant to the Administrator for Community Affairs at BHA. He was also a recipient of the Lewis Hines Award in 2012.

His incredible story of dedication to the Boston community is nothing short of inspiring.

1. What are some of the challenges you see today’s youth face?

I used to ride around the city before I headed into the office, especially during the fall and winter. I would see a little kid standing on the corner in about 17 degrees with no coat and I would say ‘there goes another young person who has an elephant in their living room that they can’t talk about’. But they will act it out in school in other ways. This sends a message to me.

So one of the challenges that I try with parents and young people, I tell the parents that they need to be historians and we have to teach our young people how to become historians. I believe that once we understand the history of the past, a lot of the times they won’t fall into the traps they may have fallen into today.

I will show young people what it is like when people couldn’t even vote or how people were hosed and beaten just so people could have an opportunity to do the things they do today.

I’m also aware of the situations that unfortunately I dealt with in my own life. My mother, as much as she struggled and tried to take care of my brother and myself, whenever my step father was there and the social worker was coming by, he had to leave. He had to leave because if they knew he was there, she would need to be cut on different services. So, from the man’s perspective, that’s really got to tear at your self-esteem and your manhood.

So, the challenges that we need to deal with today are having to do a deconditioning from what people have been conditioned to think about themselves. I believe all of you (BBBSMB) wouldn’t be in this business if you weren’t a prospector. Chris and I are prospectors. We believe that there’s gold in communities like Roxbury. That’s why we keep prospecting. Because there’s gold in our neighborhoods, but a lot of folks don’t want to take the time to try and find it. And I don’t think that you would be here if you weren’t, on some level, a prospector.

2. What is your role as a mentor with today’s youth?

I mentor a lot of adults when they’re coming out of treatment programs and prisons. In my non-profit program, I have watched a lot of young people who are now older, and it is fun to watch them grow and to mentor them.

When I developed ‘Educating the Minds Leave Drugs and Violence Behind Basketball Program’ it was not about just basketball. On our jersey, we have a little kid sitting on a basketball, but reading a book. Everyone that works with me, running the leagues and clinics, they have to have the mindset that it’s not just about the basketball. That might’ve drawn them in, but it’s about more than that.

It’s about when they need to talk to somebody, because there’s not a male in the house. We need to be able to listen to them, but also be straight and to help them always understand.

For me and my organization, we make sure there is no barriers for you to come into our developments. We try to showcase and give a historical background for what that developments like. We try to target the communities as a pilot that we think you can get some results and that you can spread throughout.

I took 10 guys who went to prison, turned their lives around, and said go back to your community and recruit guys from your block and bring them down to our basketball league. These were guys in gangs, threatened to kill us every day, but then they found out, when they went to court, nobody was there but their coach.

4. Which area, over the last decade, do you see the most improvement in the community, especially dealing with the youth?

The area I think that has changed the most is I am now seeing efforts being made in Mattapan, JP, and Lower Roxbury. I think we can do better in Roxbury and there has been some changes in Dorchester as well, but I mentioned those ones because there was a time when that wasn’t happening.

The one that I really want and pray about every day is the Lenox-Camden area. I’ve always felt like this was the stepchild of the city and the housing authority. Those folks really need support and if that could happen one day, then that could be a real effective approach for our work.