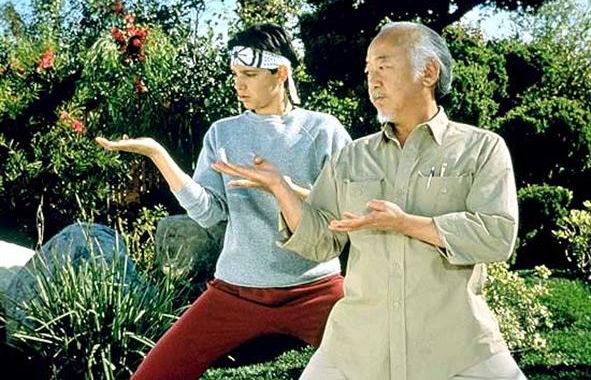 10 TV & Movie Mentors We Can All Learn From

Great life lessons and mentoring moments can be picked up from your favorite movie and TV characters. Despite some of their unsavory personality traits and unconventional mentoring styles, there are always moments we can learn from by simply watching how they impact the lives of their mentees. For fun, we put together this list of our 10 favorite TV & movie mentors …and it’s pretty awesome. Relive their greatness and let us know your favorite mentor below!

“Daniel-san, never put passion before principle. Even if win, you lose.”

Take one look at Mr. Miyagi and it’s clear that he’s chock-full of wisdom. A Japanese karate master and bonsai tree connoisseur, Mr. Miyagi has had his fare share of students. His student centered teaching method enables them to learn at their own pace; sometimes through everyday chores.

“Dear frozen yogurt, you are the celery of desserts. Be ice cream or be nothing.”

Ron Swanson is a meat-loving, tax-hating, deer-hunting, full bred American man. He doesn’t like small talk. In fact, he prefers not to talk to his coworkers at all, but when Ron does decide to chime in he drops serious gems.

“Gimme a chance to wake up, sweetheart. This mentoring is very… taxing stuff.”

Although he isn’t the perfect mentor—suffering from a very apparent drinking problem—Haymitch Abernathy led Peeta Mellark and Katniss Everdeen to win the 74th Hunger Games. Haymitch understood his mentees and knew what it would take to motivate them to survive the Hunger Games together.

“Fear is the path to the dark side. Fear leads to anger. Anger leads to hate. Hate leads to suffering.”

Yoda, a Jedi Master and the Star Wars equivalent of Mr. Miyagi, is reverred for his connection with the Force and seemingly infinite words of wisdom. Despite his short stature and calm demeanor, its safe to say that Yoda is not one to be messed with. If you’re on his good side (and even if you start trailing over to the dark side) he’ll be there to help get you back on track.

“Pops: It’s not a mess son, it’s a dance, it’s a beautiful dance. Honestly, when things are good with me and your momma I never feel more alive.
Dre: Until she tries to kill you…
Pops: Well, then I feel lucky to be alive. I told you, it’s a dance.”

Pops can be a bit crabby at times, but that never stops him from jumping on any and every opportunity to share his old-school wisdom. His advice might sound a bit extreme and curt at times, but if you sit with it long enough you’ll find the gold beneath the grump.

Great Scott! Doc has a knack for landing both he and Marty McFly in sticky situations, but he always has a master plan up his lab coat sleeve and knowledge to share with his young co-time traveler. (Sidenote: He also built a time a machine and that alone is reason enough to admire him!)

“The past can hurt. But the way I see it, you can either run from it or learn from it.”

Along with Timone and Pumbaa, Rafiki is another instrumental role model in the life of young Simba following the death of his father. Rafiki had proven himself to be a worthy mentor and was appointed to advise all kings of the Pride Lands. He often speaks of himself in third person and offers seemingly questionable advice, but he means well and oftentimes a lot can be gleaned from his lessons.

“It’s the time of year that you can think back and appreciate the real gifts you received. Friendship, for example, is a real gift. And it’s given with no expectation and no gratitude is necessary. Not between real friends. You think about that.”

They say having too much knowledge can be dangerous. If so, Mr. Feeny has been living life on the edge ever since his first appearance in Boy Meets World.  Whether it’s helping Cory and Topanga get through a rough patch or showing Eric his true potential, Mr. Feeny was always next door (or down the hall) with invaluable advice.

“Nobody does anything without help, Will. People open doors for me and I’ve worked hard to open doors for you. It doesn’t make you any less of a man to walk through them.”

It takes a special kind of person to take someone else’s kid into their home and treat them with the same love—albeit tough love a lot of the time (see above)—that they give their own children and Uncle Phil is nothing short of special. Sometimes it seems like Will goes out of his way to get on his Uncle’s bad side, but he never gives up on his nephew.

“Words are, in my not-so-humble opinion, our most inexhaustible source of magic. Capable of both inflicting injury, and remedying it.”

Hogwarts is hands down the greatest fictional school in the history of mankind, so it’s only right that Albus Dumbledore, Headmaster of Hogwarts, be considered the greatest principal of all time. As Headmaster, Dumbledore was responsible for the well-being of all students and overseeing everything happening around Hogwarts, including student affairs. As Harry Potter’s main mentor, Dumbledore always said just enough to help Harry find the right path and wasn’t afraid to let him fall in order to learn how to pick himself up.