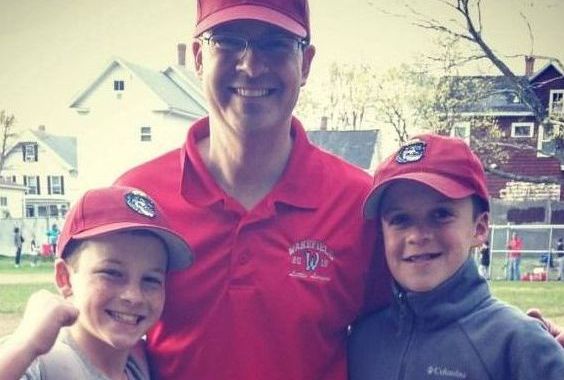 This spring, our VP of Marketing and Community Engagement, Rich Greif, delved into some new territory. As a long time Big Brother and mentor, he decided to become a coach to his son’s AAA minor league team. As we read about his experiences, from his hesitations at the beginning to his positive philosophy and fun, we couldn’t help but notice that a lot of his observations as a coach correlated directly to mentoring. Even though it wasn’t a formal mentoring program like BBBSMB, a lot of the same positive youth development concepts rang true. No doubt programs like BBBSMB had an influence on his experience and is something current Bigs and potential Bigs might find interesting!

Take a read and let us (and Rich) know your thoughts.

After 7 years of being a parent of two Little Leaguers and a Big Brother, I finally waded into the uncertain waters of being a Little League coach for my 9 year old son’s AAA minor league team this spring.  I was hesitant when first asked since I’m not a baseball skills expert (does lifelong diehard Red Sox fan count?) and I’ve seen enough Little League games to know that coaches and parents are all over the map in terms of their attitudes and behavior.  Plus I know coaching your own child can have its ups and downs. But it turned out to be a great experience and I got as much out of it as the kids did. Here’s why:

Coaches’ overarching philosophy and attitude is everything.  I was fortunate to be asked to coach by a great guy who had coached my son before, and combined, we had five coaches to help share the load.  It was clear from the start that developing their skills, getting everyone involved, supporting each other as teammates and having fun was our main priority. Sure, we were trying to win every game, but we didn’t want kids to sit out too long and we wanted to give them chances to try new positions. We tried to make failure OK by encouraging them when they struck out swinging instead of taking a called third strike. The confidence to swing is more important than the results.
Kids need mentors as much as baseball fundamentals. As a professional in the youth mentoring field, I quickly saw how equally important developing social and emotional skills like competence, confidence, character, connection, and caring matter just as much, if not more, than developing a new pitch or hitting stance. For some kids it was being a cheerleader and building their confidence, for others it was learning how to be a leader on and off the field, while for others it was just the sense of connection with the coaches and their teammates and developing a sense of empathy and support for others especially when a teammate was struggling during a game.
Just like parenting, coaching your own child is a constant work in progress. One of my biggest hesitations was coaching my own son. I already knew the last thing he wanted was to be embarrassed by his dad. Sometimes he just needed me to be his dad cheering him on and other times he needed a little perspective when things weren’t going his way. Sometimes he’d listen and sometimes he wouldn’t. Sometimes (OK – often) it was better coming from another coach. Sometimes it was better when we’d talk long after the game. Either way, I got a front row seat to some really proud moments of his pitching and hitting that I wouldn’t trade for the world. And as a bonus, my older son helped out as an assistant at several games so it was a treat to have a complete father-sons experience throughout the season.

Coaches should have fun too. Suffice to say, there are some coaches that are so serious throughout the whole game and focused only on winning. For sure, our group of coaches always thought carefully about who was pitching, the lineup, switching up players in the field, and making sure kids knew what they should be doing in every situation. But as coaches we spent a lot of time talking about baseball, family, chatting with parents and the other team’s coaches and of course some good-natured ribbing of each other. If we want kids to relax and have fun, then adults need to set the right tone. Trust me the kids are watching us adults.
Whether kids stick with it depends on whether they learned and had fun and not whether they won the championship.  What mattered most to us is that the kids all cheered hard for each other and had each other’s backs. Literally, every kid on the team had a nickname when they came up to bat. Every kid on the team developed in some way, whether it was their batting or pitching skills, their confidence, or simply that they belonged to an important group that they could feel proud of.  Before the playoffs, the league director reminded coaches: “Your gravestone will not say one day ‘here lies the person who lead his team to a minors championship’ and if it does…….yikes”. So while we didn’t win the championship, we made it pretty far and the kids and coaches had a blast and that’s what we’ll remember. #ScrappersForever