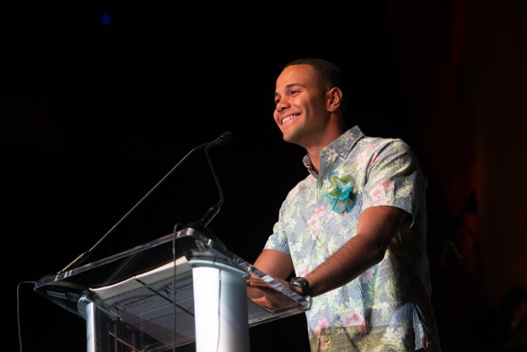 From Homeless Shelters to Harvard

Mike Gandy grew up in a less than ideal situation. He lived in homeless shelters and public housing projects, while having no male role model to help guide him. To fill this void, Mike’s mother signed him up for the Big Brothers Big Sisters program…and the rest is history. Big Brother Austin made an immense impact on Mike’s life and it is clear from what he has been able to accomplish. He has now gone on to follow in his Big’s footsteps by attending Harvard Business School and even became a Big Brother himself to Little Brother James!

At Big Night 2016, Mike shared his story with his Big Brother Austin and his Little Brother James at his side. Prepare to be inspired and read (or watch) this amazing story below!

“Thank you Kate for the fantastic introduction. Before I start, I’d like to thank all of you for your support of Big Brothers Big Sisters. It truly is an amazing organization.

Tonight is a particular honor for me because my presence on this stage is pretty unlikely. I joined the program almost 20 years ago as a Little. Managed to eat my way into becoming the BIG Little. And most recently became a Big of my own match, completing the journey full circle.

I’d like to start with a quick story that Austin told me a few years ago. He said that during the matching process, he was presented with three potential little brothers. For the most part, every 9 year old that applies to be a little brother is a bright kid in a less than ideal family situation, and typically in an under resourced community.

So how did I end up with Austin?

Well, he chose me because I lived the shortest distance from his apartment and I listed sports as an interest. Thanks to those two simple factors, we were matched and I was able to thrive.

Like so many Littles, my story begins with my mother. She is one of the most modest, caring, and self-aware people I’ve ever met. My parents never married, and a month before I was born they split up.

The first place I ever lived was in a homeless shelter in the inner city. Each morning at 7:00 AM my mother would be forced to leave the shelter with her newborn and could not return until late that afternoon. From there we moved into a public housing project. We received welfare assistance but it was a start, and we finally had a place to call home.

Once I was old enough to attend school, my mom re-entered the workforce as an administrative assistant. Despite some of the obstacles and distractions, I was a happy kid that excelled in school. My mom did the best she could to provide structure and set me up for success, but she knew that without my father around, that there was something missing.

So, she enrolled me in the Big Brothers Big Sisters program in hopes of exposing me to a positive male role model. Little did I know that her decision would change the trajectory of my life forever.

I was matched with Austin when I was 9, and early on our relationship revolved around sports. I still remember when I was playing baseball and the umpire had to stop the game because I was doing cart wheels in the outfield. I was TERRIBLE!

Fortunately, Austin was in the stands to take notice, and for the next few months he took the time to teach me the fundamentals. Like how to secure a pop fly, or how to position my body to stop a ground ball.

By the next season I had gone from the kid doing cartwheels in the outfield to one of the best pitchers on the team, and even got to try out for the Little World Series team.

Austin filled a void that I didn’t realize was there, proving my Mom’s spot on intuition.

After two years of being matched, Austin left for Harvard to start business school. I’ll never forget saying goodbye in the airport. I gave him a hug just before he boarded the plane, and began to cry while he held me in his arms.

It wasn’t until then that I realized how much I cared about Austin, and how lucky I was to have him as a Big Brother.

Even though we were in different cities we remained close. In the 7th grade, one of my closest friends had his first child.

Soon after, Austin sat me down to make sure I didn’t follow a similar path and we had “The Talk”.

For my first school dance in the 8th grade, Austin was the person that I called to walk me through how to tie my tie (and…keep in mind this was before facetime…).

From the birds and the bees to tying perfect Winsor knots, Austin became my go to guy.

Just a few months later, I got the chance of a lifetime to visit Austin on campus at Harvard. As class began, I sat nervously, half-listening to the discussion, but soon realized that I was able to follow along. Afterwards, Austin assured me that the students in that classroom were just like me.

He said “They are smart, friendly people who applied themselves.”

Unfortunately, his is words took a while to sink in as I failed a couple of classes and didn’t get any A’s my first semester of high school. My mother was disappointed, but Austin was furious. Shortly after getting the news about my grades, Austin flew down and met with all my teachers. I’ve never been so embarrassed.

Right then I told him I wanted to go to college and get a good job. I’m not sure if I really believed that was possible, or if it was just what I knew he wanted to hear, but together, we laid out a plan with specific goals to get me there.

Austin’s words resonated with me. Soon, I began surpassing expectations in the classroom, on the basketball court, and on the football field. I worked hard, stayed humble, and carried myself with integrity. He expected me to do great things, and I learned that I was capable of far more than I thought possible. All I needed was someone to hold me accountable. Austin put me on path where I believed I could succeed, regardless of the obstacles in front of me.

As I got older, Austin continued to expose and guide me to new experiences and new ideas.

When I had my heart set on attending the local university 15 minutes from my Mom, Austin joined me on my college visits to make sure I considered all that out of state schools had to offer.

When I started to think about different career paths, Austin let me hang around at the private equity firm he worked at. I spent more time asking questions about what finance was than the work I was given, but I called it an internship on my resume and it got my foot in the door. For the next five years I worked in investment banking in New York at Bank of America Merrill Lynch, and wouldn’t have gotten past the interview process without my learnings from that summer.

When I started to think about marriage and settling down, I went to Austin for help to understand what that meant and to plan my proposal. Without Austin’s guidance and advice I would have been lost.

Our relationship has led to several life changing moments including standing as Austin’s best man at his wedding, being the first of my family to graduate from college, and finally figuring out a way to repay Austin for my trip to Boston almost 15 years ago.

Last Fall I was accepted to the Harvard Business School and invited him to join ME on campus!

But the most special moment of all was when I became a Big Brother and had the opportunity to pass on some of the lessons that Austin taught me growing up.

My Little Brother James is a 10th grader that lives with his brother, sister and Mom. He wants to be an actor when he grows up, but if that doesn’t work out he wants to be in business. He’s on the debate team, and his favorite subjects are science and literature. We’ve spent countless hours at the YMCA and the library working through his math homework. There was one day in particular that stands out why Big Brothers Big Sisters is such an amazing organization.

Last Spring, I organized a panel at Harvard to promote Big Brothers Big Sisters. The panel consisted of current and former Bigs that were also alum of Harvard. Topics ranged from finding time to be a Big to how much of an impact being a Big had on the Bigs life. It was a great success and we even signed a few people up to become Bigs! But the greatest thing about the panel was that it finally gave me an excuse to get James to visit me at Harvard and sit in on a day of classes.

It was unreal to recreate that day I first visited Harvard. After the panel, James, Austin and I had dinner in downtown Boston. Three guys just hanging out…unrelated by birth, but family nonetheless.

Austin always used to tell me he got more out of our relationship than I had. I never really understood what he meant, but now I do. I feel so privileged to be able to help guide James, and open up new worlds for him. I’m not sure what’s in store for James, but I’m looking forward to following his achievements, minor setbacks, and development.

Still, I can’t help but think about the other two kids on the waiting list when I was matched to be Austin’s Little.

But tonight we gather to make that list shorter so that more deserving kids can have the chance to thrive.

Now I’d like to ask James andAustin to join me on stage because I couldn’t imagine having this moment without sharing it with these two.” Mike’s application letter to Harvard Business School was featured here on the Being BIG blog, check it out here!