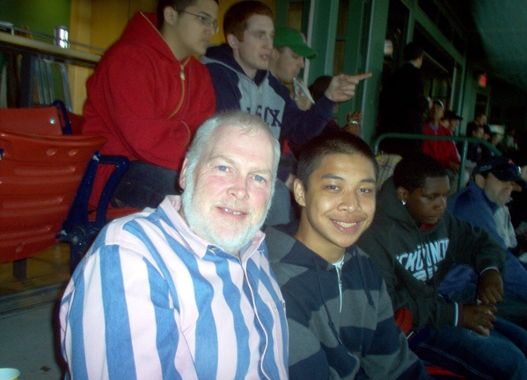 Throughout their match, Bob exposed Tim to the idea of paying it forward. Now, Little Brother Timmy Leung will be competing in the Boston Marathon this April with his goal to finish and help raise $5,000 for the American Red Cross. Without his Big Brother Bob, he reflects on how none of it could have been possible. Read their story below and don’t forget to check out Team BBBSMB runners as well!

Bob first found out about becoming a Big Brother when he met and spoke to John Pearson, former CEO and President of BBBSMB. Bob always had an interest in volunteering and giving back, so the decision to become a Big Brother was an easy one for him. He wanted the chance to become a role model for a young man and help introduce him to some new things in the world.

“When we first met I was a little bit nervous,” Bob reflected. “I wanted to make a good impression on Timmy and his family. However, once we met and I saw his excitement I began feeling much more comfortable.”

Bob and Timmy enjoyed doing many different activities throughout their match. Traditional activities like going to the movies, bowling, or catching a ball game were frequent but they also made a conscious effort to give back in some capacity. Being a fan of the outdoors, Bob introduced Timmy to hiking, snowshoeing, and often brought him along to volunteer and perform trail work at the Blue Hills Reservation. These activities helped shape Little Brother Timmy’s desire to give back himself. This trend continued as the two went on to participate in the Rodman Ride for Kids together and raised $2,000!

“The one word I would describe Bob is unselfish. Just simply becoming a Big Brother is worthy of that word alone, but the way he went above and beyond was truly special,” Timmy reflects.

Bob and Tim have now graduated from the program, but still remain extremely close. Thanks to the time they spent together, Tim developed a desire for giving back to his community and a love for the outdoors. With both of these in mind, he made the decision to run the Boston Marathon.

“I always knew that I wanted to run the Boston Marathon and with my current schedule, age, and condition my body is in I felt it was really the perfect time to do so. I will be running for the American Red Cross as they extend an outlet of hope and healing for those who do not have that luxury. My goal is to raise $5,000 for the cause”.

Running the Boston Marathon is certainly no easy feat, and Tim was well aware of that coming in. When he had some doubt about whether he should pursue this goal, he went right to his Big Brother.

“Bob was actually one of the 3 people who played a major role in my decision to run. He was one of the few people who remained positive despite the major commitment it takes. He pointed out the challenges, but was so encouraging and confident I could get past them. Since I made the decision, Bob has helped with the fundraising by spreading the word and even donating money himself. If I was not a Little Brother, I’m not sure if I would be running this April. I was always interested in giving back to the community, but thanks to Bob he helped reinforce that for me and encourage me to pursue my dreams”.

Bob’s impact on Timmy is clear by what he has been able to accomplish. He is an engineer, a student, and an athlete. From early in their match, Bob helped reinforce these interests of Tim’s and ultimately influenced him to do these extraordinary things.

“A tip I would give to other Bigs is to simply find things that your Little is passionate about and try to shape the outings around that. Timmy always wanted to learn more, so we visited many museums and spent time outdoors to learn about the world around us. Also, try to let the Little take control sometimes to make sure they are doing what they want. And lastly, be sensitive to challenges your Little may face, but also try to encourage them to move past them. Timmy was very shy at first, but by connecting with him and doing things he liked, he was able to overcome that challenge”.