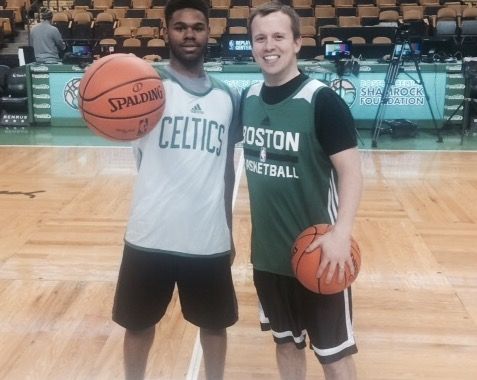 Mentoring Real Life Story: You Don’t Have to Be the Perfect Mentor

Not every mentoring relationship is perfect. After being matched with his Little Brother Quincy for over a year, Big Brother Paul Roberts was at a loss. Due to tough circumstances in Quincy’s life, the match got separated. Paul tried several ways to contact Quincy but couldn’t seem to get ahold of him. There was nothing he could do but wait. Little did he know, however, that Quincy was also searching for him at the same time. It was until a year later that Terry McCarron, the Director of Program Services at BBBSMB, recognized their names and put the pieces together, ultimately allowing the two to reconnect. Since then, Paul has been a hugely influential volunteer with an inspiring outlook we had to share.

Big Brother Paul and his Little Brother Quincy pose on the court of the Garden after playing a game of basketball at an exclusive Celtic’s event.

In 2007, Paul Roberts was working as a financial advisor at Northwestern Mutual when he first heard about Big Brothers Big Sisters at a corporate seminar.  He was matched with his Little Brother Quincy in 2008, and had a wonderful time as a Big Brother up until the separation, spending time getting to know each other and sharing the same love for Boston sports. When they reconnected, Paul was thrilled.

“It was great,” he reflects.  “It was so neat that we were both looking for each other. It was either divine inspiration or coincidence, but I believe that everything happens for a reason, and it was exhilarating.”

Since then, Paul has been deeply involved with our program in multiple ways. Along with being a Big Brother, Paul also paired with our Community Engagement Team in order to bring our organization to his new company, USI, where his colleagues could learn more about adding a little.  Lastly, and most recently, Paul was named a new member of our Board of Overseers.  In this position, Paul says he plans on serving as both an enthusiastic and an ambassador of the program.

“Wendy’s latest blog post regarding Boston youth who were unfortunately killed in an act of violence and had sought out Bigs really struck a chord with me,” he said.  “I saw how important it is for something as simple as being there and being someone to rely on.  I was blessed to have three older brothers myself, so I know how important it was for me to have them. Being the youngest in my family I never had the opportunity to be a big brother, so this is an opportunity for me to share what they gave to me.”

Along with his family, Paul also says he is motivated by his faith:  “My mom and my faith inspire me to be the person I am and to give back. I also share my faith with Quincy, which is great because we get to have some pretty important conversations that bring us close together.”

Today, when Paul and Quincy aren’t having these important discussions, you can find them playing sports or cheering on their favorite Boston teams. Recently, Paul and Quincy attended an event with the Celtics where they got to play a full game on the floor of the Garden with Paul’s colleagues and CFOs of other companies. To make the night even better, one of the players was the HR director of DraftKings, a Boston-based online fantasy sports startup, who offered Quincy a summer internship based on his interests.

“It was great for his confidence, and good for him to see that options can be limitless when you meet the right people and learn to follow through,”  Paul said. Because Paul has experience in recruiting and talking about BBBSMB to potential Bigs, he offers some great advice to those considering joining the program:

“First I would say to make sure you don’t commit unless you can be there for a year. I tell someone to wait two-three weeks to make sure they are ready for that commitment. Second, I would say that being a listener is important. We have two ears and one mouth for a reason—we listen twice as much as we speak. And overall, just being there for them is key.”

After talking to Paul, it is clear that his experiences and successes with Quincy are a true testament to this advice.  He has seen an improvement in Quincy’s grades, confidence levels, and internal drive to take initiative and think about plans for the future.

At the end of the day, Paul’s call to action is simple. With the right intentions, everyone has the potential to make a difference, no matter what their circumstances may be. People often worry over whether or not they are good enough to be a mentor, but to Paul, it’s not about being perfect. Rather, it’s about being supportive: