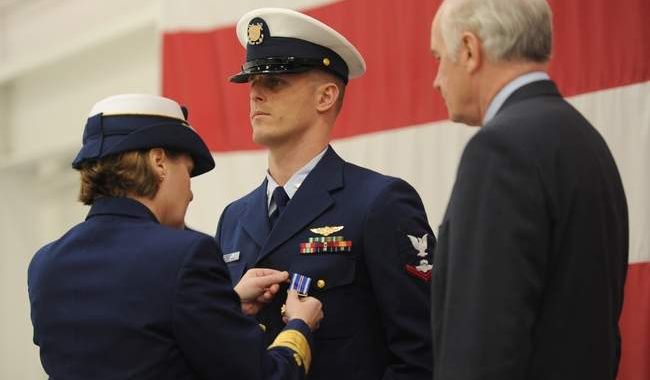 Not All Heroes Wear Capes: Part 1

At BBBSMB, we often tell our current and potential Bigs that they do not need to be a hero in their mentoring relationship. While we still stand by that, for Bigs Evan and Chuck from Big Brothers Big Sisters of Cape Cod & the Islands, it is a little different. Evan, a member of the Coast Guard, and Chuck, a Falmouth police officer, both were recognized by the American Red Cross for being heroes in their community. We were lucky enough to interview both “heros” and got so inspired we thought we’d feature them in a two part blog post. Read on about Big Brother Evan and hear how his heroic job plays into his role as a Big Brother.

Big Brother Evan is a member of the U.S. Coast Guard at Air Station Cape Cod. Last week, the American Red Cross honored local community members who have done extraordinary things, and Evan was a recipient of the armed forces hero award. He has been able to bring his heroics into his match with his Little, Jamie, and instill the core values of the Coast Guard in him.

What did you do to receive your honor from the American Red Cross?

I joined the Coast Guard 8 years ago and serve as a Helicopter Rescue Swimmer. It is something I always had an interest in and growing up I was a lifeguard in the summers, so it was an easy transition. As far as the honor, I was one of the recipients of the armed forces hero award. I received this for rescuing a father and son from a disabled sailboat off the coast of Nantucket.

Growing up I actually had a mentor of my own who really shaped me into the man I am today. He was an older gentleman who was a family friend and we really bonded and he made a lasting impact on me. So, in my decision to become a Big Brother I just wanted to make a similar impact on a child in need in my community.

I felt a little nervous as I was meeting Jamie for the first time, but as soon as we met that feeling went away. I knew right away that would get along fine, and was really excited for what the future held for us.

Jamie and I both love sports so we play a lot of football and catch. We are also very competitive, so we often have a little bit of healthy, friendly competition. Even when we are walking down the street talking, it can turn into a race to the next fire hydrant. We also love to eat, whether it is going out or cooking. Both of us love all kinds of food, so we are always looking for something new to try.

One memory that sticks out is when we were making vinegar and baking soda rockets together. Jamie started shaking the bottle up and the cap flew off, and I ended up covered in the baking soda and vinegar. We were laughing ridiculously at the moment and still laugh about it today.

Jamie is definitely much more open about talking to me about school and home. Jamie feels comfortable talking to me about some of the struggles that he has faced, and I’ve been able to help and coach him through it. Our relationship is not always about sports and eating, so this is really the most meaningful part.

What do you think your Little has learned form you?

At the start of our match, Jamie was pretty shy in social settings. So I tried to encourage him to speak up, talk to people, and just simply put himself out there. Just recently actually, we were in a park and saw a WWII veteran in a wheelchair. When we walked by Jamie approached the man and thanked him for his service. It was a really cool moment and made me really feel like I have made an impact.

Honestly, I have probably learned more from Jamie than he has from me. I have learned all about relationships and trust from our time together. With friends my age, not much has to go into it. With Jamie though, we have to develop a special level of trust with each other in order to truly connect.

What lessons/skills from being in the Coast Guard have you been able to bring to your match?

The 3 core values of the Coast Guard are: honor, respect, and devotion of duty. All 3 of these values I have been able to transfer into our match in one way or another. In applying these values I also need to make sure to balance them so I am not acting as a father, but more of a brother and a friend to Jamie.

There is nothing to be scared of when becoming a Big. It is much more fun and exciting than it is a serious commitment. Also, you learn so much about yourself from the program. Jamie teaches me things probably more often than I teach him. Lastly, having the opportunity to make a lasting impact on someone is just such a rewarding feeling.