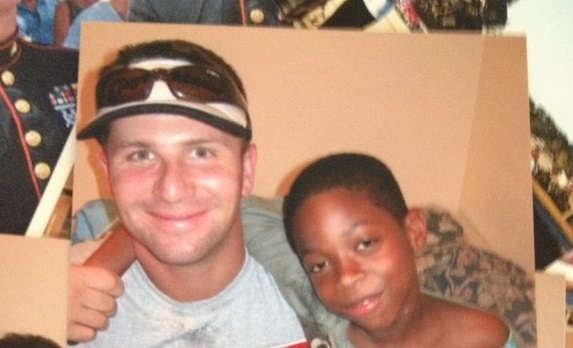 BOSTON- For the past seven years, Kennedy was the Big Brother to Alex Beauzile, 14, through Big Brothers Big Sisters of Massachusetts Bay.

“When Mike came in, he kind of changed my life,” Alex said. “He was always there to encourage us to do better — me and my sister.”

Kennedy and the Milton teen have been snowboarding, attended Celtics games and spent a lot of time just hanging out.

They consider Kennedy part of their family, and his photos are all over their Milton home.
“I’m so thankful that he gave us the opportunity to be part of his life, part of his heart. Since last night, I felt like he was smiling down,” Morelus said.

“He’s an awesome guy. I still can’t believe he’s gone. He helped my family a lot, and that’s something most people wouldn’t do for anybody else. But Mike did that,” Gabby said.

Kennedy and his family have supported the single mother and her kids in ways they never expected.

“Doorbell rings and here comes Mike — with that big old smile,” Morelus said. “It was like he was Santa Claus. Like you just won the lottery.”

Through tears, Morelus said when Alex receives his high school diploma, it will really belong to Kennedy.

When asked what his best memory of Kennedy, Alex recalled a trip to Six Flags New England in Agawam.

“At the end, he told me he loved me and I said, ‘I love you, too,'” Alex said.
Kennedy was helping Alex fulfill his dream of someday becoming a police officer, the family said.

Some of Kennedy’s friends have contacted Big Brothers Big Sisters to volunteer in his memory.

There are over 800 boys in the Massachusetts Bay area looking for a Big Brother. Volunteer today.

For more clips on Big Brother Michael Kennedy and his Little Alex click below:

Kennedy’s ‘little brother’ reflects on his time with the firefighter
My Fox Boston
March 29, 2014
*Includes clip