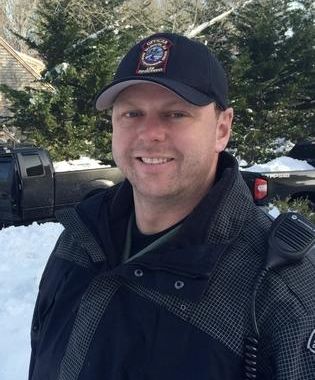 Not All Heroes Wear Capes: Part 2

At BBBSMB, we often tell our current and potential Bigs that they do not need to be a hero in their mentoring relationship. While we still stand by that, for Bigs Evan and Chuck from Big Brothers Big Sisters of Cape Cod & the Islands, it is a little different. Evan, a member of the Coast Guard, and Chuck, a Falmouth police officer, both were recognized by the American Red Cross for being heroes in their community. We were lucky enough to interview both “heros” and got so inspired we thought we’d feature them in a two part blog post. Read on about Big Brother Chuck and hear how his heroic job plays into his role as a Big Brother.

Read the local coverage on Chuck and Evan.

Big Brother Chuck has worked for the town of Falmouth for 16 years now and is currently the deputy director of marine and environmental services. This past month, the American Red Cross honored local community members who have done extraordinary things, and Chuck was a recipient of the life-saving hero award. Chuck has been a Big Brother to Wil for almost a year now and been able to use his perspective in law enforcement to lead him down the right path.

What did you do to receive your honor from the American Red Cross?

My honor came from one day when I was on patrol and found a man collapsed in the middle of the roadway. I got out, assessed the man, and he suddenly went into cardiac arrest, so I grabbed the AED and defibrillator and was able to save this man’s life. The crazy part about the story is for all my time in the department, we did not issue AED’s to be in the vehicles. It was not until the night before the rule was changed, and we sure were lucky to have it that morning.

Growing up I struggled with dyslexia and went to a boarding school to help me with it. While attending the school I met many teachers and house parents who were instrumental in helping me succeed in life. So, I became a Big because I wanted to give back to my community and provide for someone else the same way I was provided for. hat were your initial feelings with your match?

I actually had a potential match before Wil that did not work out, so I guess I was a little apprehensive at first. However, as soon as I met Wil all of those feelings went away. We instantly clicked. We share a lot of the same interests and really enjoy our time together.

Wil and I have a wide array of activities we enjoy doing. Wil loves his fine dining so we go out to eat often. Our favorite restaurant is Landfall. We also enjoy the outdoors, whether it be fishing, shellfishing, playing hockey, or just hanging out. We always have a great time with each other.

Like any relationship, we have grown to understand each other’s backgrounds more and develop a great trust between us. Our dialogue has also grown in the past year as we are both very open with one another about any struggles or just setting up an outing. Wil is such a likable kid, so there were never any major hurdles for breaking through with him.

The one word I would use to describe Wil is driven. Around the time we got matched, Wil went in for ankle surgery. This forced him out of hockey and other activities that he loved to do, and would discourage many people…but not Wil. He never got down on himself and consistently went to PT and fought through to now be back out on the ice. When the going gets tough for Wil, he keeps on fighting.

As you could tell with the ankle story, Wil does not let things get to him. He is far beyond his years and very calm and good at processing things and seeing what is important. This has really helped me put things into perspective in my own life. He has helped me realize what is really important in life.

What lessons/skills from being a police officer have you been able to bring to your match?

In my line of work I see too many kids go down the wrong road. Many of these children do not have mentors to show them what they can do with their life. So whether it’s being a police officer or a Big, I just want to help youth overcome any of these challenges they may face. Wil comes from a single parent home, so I try to provide a listening ear to help him through any issues, as well as giving him the skillset to do so on his own.

You get out of the program as much as you put in. It’s as simple as that. It’s such a rewarding program and I honestly do it for myself as much as I do Wil. Seeing his eyes light up when we see each other or during an outing is just such an amazing feeling. I would recommend it to anyone.